This year the open-air has become even more appealing, with people choosing to stay away from packed and poorly ventilated indoor venues in favour of the great outdoors. If you have time on your vacation and want to take your kids somewhere fun, here are some ideas.

Shimizu Park is an excellent park for the whole family. It has expansive grounds featuring the flowers of all the seasons - cherry blossoms in spring, hydrangeas in the rainy season, irises and roses in Summer and colourful maples in Autumn. In fact, the rose garden is adjacent to the main park and is a lovely park in itself.

The highlight of the park is the large athletic field. It has over 100 obstacles that can be attempted by both kids and adults. They even have a water obstacle course! It's like an enormous playground that adults can use! Across from Shimizu Park they also have pony rides and a giant maze.

Cost:
Adults: 1,000 yen
Elementary kids: 700 yen
Preschoolers: 200 yen
Separate cost for the flower park, pony rides, fishing, camping etc.
Can be combined with: Kashiwa Station is always lively with plenty of dining options. You could explore the area after the park, if you're not too muddy! Alternatively, the Metropolitan Area Outer Underground Discharge Channel is very close, but you need to arrange this in advance!
How to get there: From Nippori or Ueno, take a Joban Line train to Kashiwa Station and transfer to the Tobu Urban Park Line. From there, it takes about 30 minutes to Shimuzu-koen Station. Walk 10 minutes. (Google Maps)

Ogawa is a town in Saitama, which neighbors Tokyo. It is famous for washi paper, a traditional Japanese style of paper which has been passed down for over 1000 years. At the Ogawa Craft Center, you can try making and decorating your own washi paper.

After that, walk to 291m high Sengenyama (Mt. Sengen Hill View Park), a small mountain with Saitama's longest roller slide. At 203m long, both kids and adults can enjoy it! They give you a small cardboard sled so rest assured your buttocks will not be in pain! There is also a playground in the woods behind the slide.

After this adventure, if you're up for more walking, head down the mountain and to the Ogawa Onsen Kawara-no-yu, a hot spring facility fairly close to the station. It makes a lovely place to unwind after a fun day outdoors.

Cost: 100 yen per slide + various costs in the craft center
Can be combined with: Onsen
How to get there: Take the Tobu Tojo Line Express from Ikebukuro to Ogawamachi. From there, either walk or catch a local bus. (Google Maps) 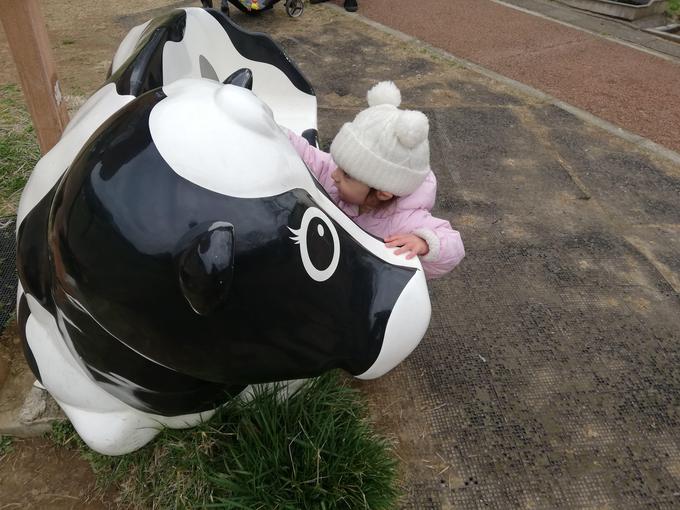 There are several Kodomo no Kuni parks in Japan, but we will focus on the one in Kanagawa, which is next to Tokyo. Kodomo no kuni means Children's Country, and is an enormous park designed to develop a child's mind and body.

The park is so huge that just walking around it is refreshing, but the kids will appreciate the numerous rides, pony rides and the small zoo. In Summer they have swimming pools and in Winter they have an ice-skating rink. There are also many playgrounds dispersed around the park - some with giant roller slides, one with huge bouncy pillows. This place is a child's dream.

Cost:
Adults: 600 yen
Elementary/Junior High: 200 yen
Kindergarten: 100 yen
Can be combined with: You should stay the whole day.
How to get there: Take the JR Yokohama Line or Tokyu Denentoshi Line to Nagatsuta Station, then change to the Kodomonokuni Line and get off at Kodomonokuni Station. (Google Maps)

Kurihama Flower Park is a little far from Tokyo, it is closer to Yokosuka in Kanagawa, which is home to a large American navy base, making this park popular with expats in Japan. It has several flower gardens, including a stunning cosmos flower field in September and poppy field in June. There is also a footbath containing herbs from their expansive herb garden. For those into sports, you can even try mini-golf, archery and a rifle range.

The best thing about this park is the playground, known fittingly as Adventure Land. There is a giant Godzilla slide along with lots of other play equipment.

Cost: Free
Can be combined with: Sarushima or Yokosuka Soleil Hill.
How to get there: Take the JR Yokosuka Line from Tokyo to Kurihama Station. Or take the Keikyu Line Rapid from Shinagawa to Keikyu Kurihama. Walk 15 minutes. (Google Maps)

This park is just outside of Tokyo in Kawasaki, but too amazing not to include. It is a mud park - a park where children can run free and wild and get as dirty as they like. There are campfires, hammers, nails and saws. It is a rare haven of no rules.

At the Yume Park, kids can bring vegetables to cook on the fire, build their own structures, climb like Tarzan on the trees and wooden structures, dig holes and fill them with water, and slide down slippery slopes into giant mud puddles. There are also some indoor areas like a baby play area and a music center - but be sure to rinse off the mud first. Definitely bring a change of clothes (or two)!

Cost: Free
Can be combined with: Kanagawa Prefectural Higashitakane Forest Park
How to get there: Take the Odakyu Odawara Line from Shinjuku to Noborito, then change to the JR Nambu Line Local and get off at Tsudayama. (Google Maps)

The Shinagawa Aquarium houses over 450 species of aquatic animals. They have sea lion and dolphin shows along with a special "touchable" section. The facility is divided into sections like river fish, ocean fish, deep sea life and more. This is technically an indoor facility, but can be combined with the outdoors in the rest of the park. That is because it is located in the Shinagawa Ward Resident's Park which has a large pond and an adventure park. The adventure park has free bike rentals, a mud park, lots of rainbow coloured slides and even an outdoor pool in summer.

The Kamichiba Sunahara Park is a little off the beaten track, located near Kameari Station in Katsushika word. It is not a very well known area, but this park is pretty nice! It has a small zoo with pony rides for small kids, and a cycling area complete with traffic lights for the kids. Bicycles are free to use. It also has a pretty adventurous playground, water play area and a nice grass lawn to picnic on.

Cost: Free
Can be combined with: Nishiarai Daishi Sojiji or Kita-senju area
How to get there: Take the Chiyoda Line from Nishi-Nippori to Kameari Station. Walk 10 minutes. (Google Maps)

Metsä Village, meaning forest village in Finnish, is a Nordic themed park in Saitama, which is adjacent to Tokyo. The village is free to enter and you can try their Finnish restaurant, craft centers, canoeing in the lake, or Panza Miyazawako (an adventure playground in the trees). Adjoining Metsä is the Moomin Valley Park, a themepark dedicated to the Moomin characters created by Finnish author Tove Jansson. It is divided into four zones along the lake - the Welcome Cove, the Moomin Valley, the exhibition facility and the Lonely Mountain. It focuses on how the Moomins live in harmony with nature and has lots of things to keep kids occupied.

Moomin is very popular in Japan, so not only do they have this paid themepark, but there is a second Moomin park that is totally free! The Tove Jansson Akebono Children's Forest Park was opened 20 years ago for all the kids of the area to enjoy. When you enter you feel like you have walked into a fairy tale! There is a museum dedicated to Tove Jansson and a library inside a forest house. You can explore inside the quirky "mushroom house" and eat lunch in the delightful Cafe Puisto which has a dedicated children's area. Nearby is the Azu Sports Park with a large playground area.

The Tokorozawa Aviation Memorial Park was built on the site of Japan's first airport which was opened in 1911. The park has on display real planes, like original Air Nippon YS-11A propeller passenger plane built in 1969 or the Curtiss-Wright C 46 cargo plane used by the Japanese armed forces. There is an entire exhibition hall filled with old aircrafts! Also in this aviation museum is a projection mapping interactive area, a plane that you can operate yourself, a moon walker, simulators and many interactive exhibits.

At one point in the 1940s, the US Air Force took over the land, only returning it to Japan in the 1980s. You can still see a large fenced-in flat grassy area marked as U.S. base territory. In the park is also an IMAX movie theater, restaurant, playground and water play area.

Cost: Free
Can be combined with: Seibu-en themepark or the various hiking trails and lakes in that area, including the Totoro Forest.
How to get there: From Ikebukuro take the Seibu Ikebukuro Line Express to Tokorozawa then change to the Seibu Shinjuku Line and get off at Koku-koen. (Google Maps) 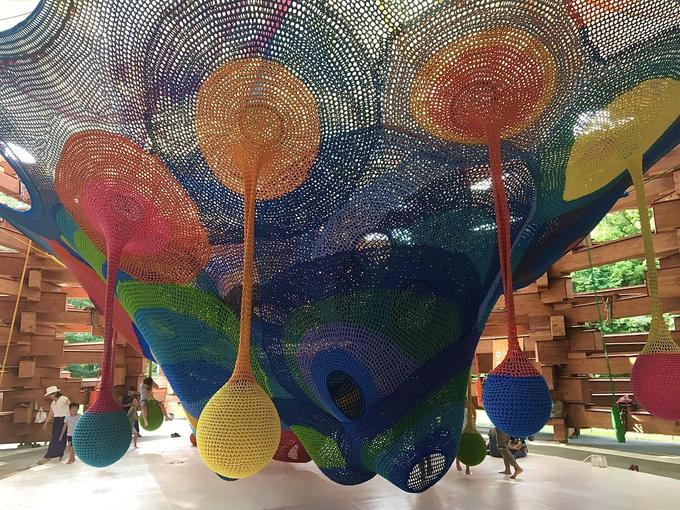 Parcabout is fun for all ages and calls on you to channel your inner Tarzan as you climb, run and jump in nets suspended in the trees. It's a playground floating in midair! It is best in Autumn as you are surrounded by colorful foliage, but any season is good. Nearby is an onsen facility called 'Only Yu'. Since this is located near Hakone, we recommend combining a visit here with the Hakone Open Air Museum (or any other place in Hakone you're interested in). It's a bit fair away, 2.5 hours by train, so the best thing to do is rent a car. It would be nice to do Parcabout and the onsen on one day and Hakone sights on the next, and stay overnight in an onsen hotel.

The Hakone Open Air Museum blends nature and art through various sculptures and works exhibited outdoors amongst the fields and mountains. There are a couple of interactive exhibits, and since it is wide and open, kids can run around, unlike in a regular museum.

That concludes this list, though of course there are many more wonderful places for children all over Japan - it is a very safe and child-friendly country. What was your favourite experience with kids in Japan?

A Weekend in Atami...
home
Where to see Early S...