The Amakusa Islands are a chain of over 120 islands situated between Nagasaki and Kumamoto. Although Nagasaki is a famous destination for tourists, Amakusa is much less well known, despite having a similar history and stunning sub-tropical island scenery. Although filled with a rich history, the nature alone makes these islands worth a visit. Lush greenery, clear blue waters and an abundance of natural geological formations which led to Amakusa being designated a national Geopark. 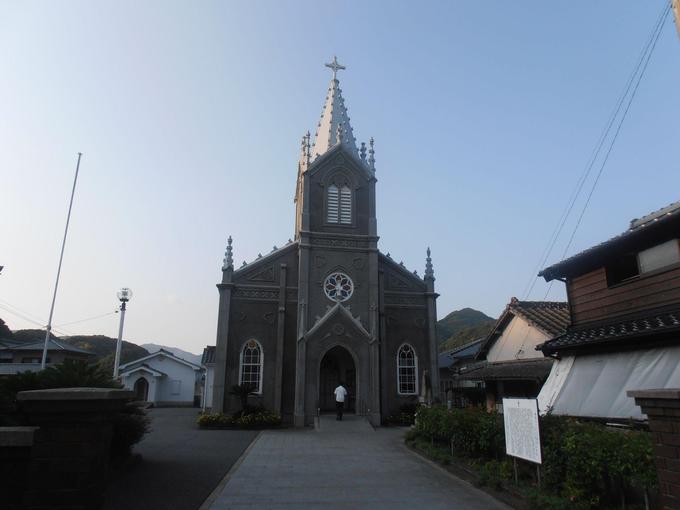 Being located near to the foreign-missionary-filled Nagasaki, Amakusa's quiet and sleepy fishing villages were converted to Christianity, becoming a religious hub. Even the local daimyo (lord) became a Christian. When Christianity was forbidden in the early Edo Period, the residents had to hide their religion, disguising it as Buddhism by creating Virgin Mary statues which resembled the Buddhist Kannon, and carving crosses into the back of Buddhist objects of worship. They would gather in the middle of the night to worship undetected. The authorities conducted sporadic checks to weed out Christians, forcing them to step on an image of Christ. All who refused were sentenced to death if they didn't publicly denounce their faith.

There are three main islands of Amakusa - Shimoshima, Oyano and Ueshima, along with over 100 smaller ones.

Myotokuji was built in 1645 with the goal of promoting Buddhism amongst the locals. Small crosses are carved upon the steps of the temple, forcing locals to step upon them in order to enter the temple. "Remove the erroneous teaching of Christ" is engraved at the gate. This temple was erected to send a message. Ironically there is now a path from the temple leading to a memorial for the persecuted Christians at the Martyrdom Park.

The original cathedral was the oldest church in Amakusa, built right after the ban on Christianity was lifted. It was rebuilt by a Frenchman in 1933, when residents were free to practice religion as they pleased. Along with the hall of worship, this site features the Amakusa Rosario Museum which contains items used by the hidden Christians during the Edo Era. 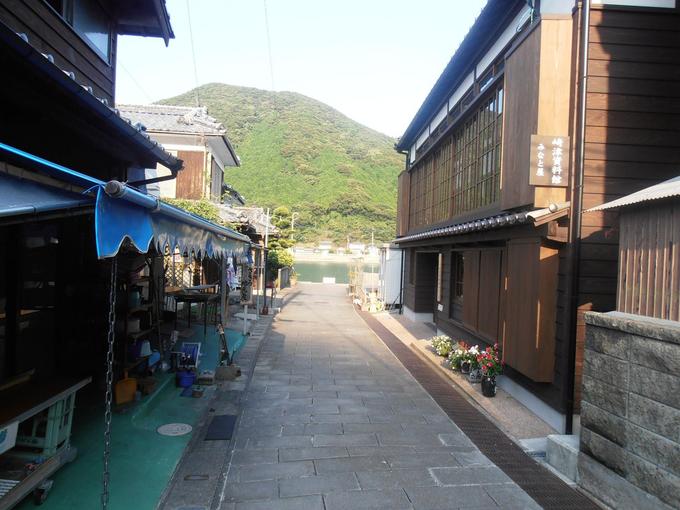 Built in 1569, Sakitsu Church was considered the main centre of the religion in Amakusa. It stands out in an otherwise small and sleepy fishing village. If you wish to visit, please register your visit in advance at: http://kyoukaigun.jp/en/visit/sakitsu.php. Besides the church, the entire village is registered as a UNESCO World Heritage site due to its history. 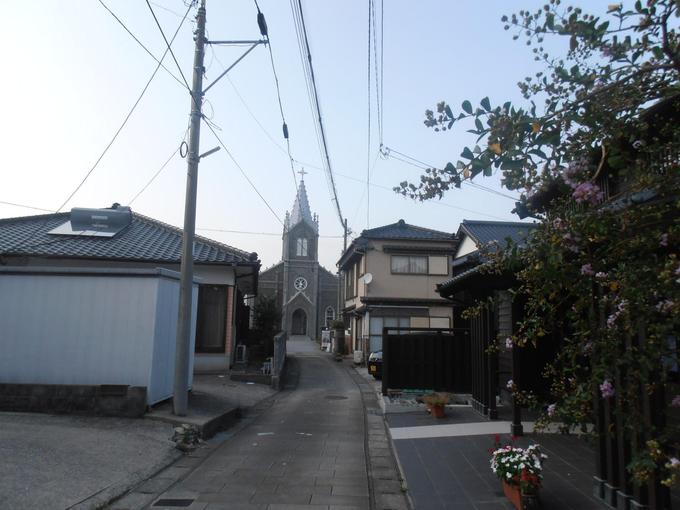 This is a medium-size museum in the centre of Amakusa which displays all facets of the hidden Christians back in the Edo Period. While the exhibits are in Japanese, there is an interesting movie with English that they can play for you. 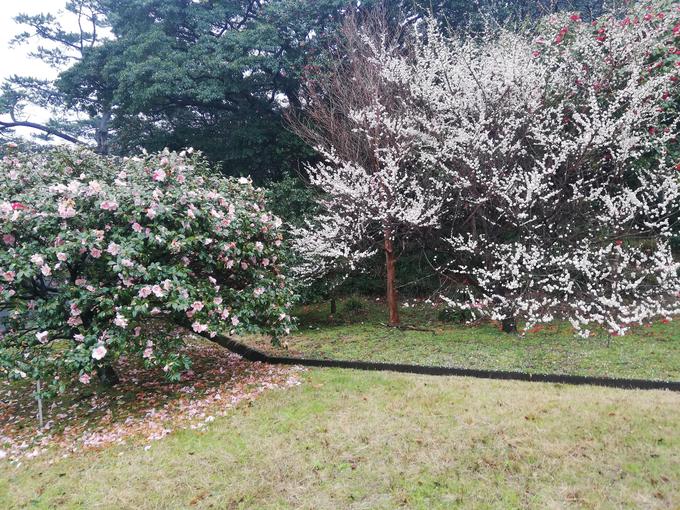 Due to its multitude of gorgeous beaches, Amakusa is best visited in the warm season. However winter is not to be ruled out. In February and March the Nishibira Tsubaki Park boasts over 20,000 camellia bushes, and the views of the flowers with the sea in the background are spectacular.

Built in 1602, the Tomioka Castle was ruled by Terasawa Shimankami Hirotaka and was a key site in the Shimabara Rebellion.

This temple translates as "temple of the Southern barbarians". It was built in 1589 for Buddhist worship, but Christian gravestones have been found under the floor of the main building, meaning both religions co-existed peacefully inside this temple.

There is an observation point on the top of Mt. Takabuto which offers one of the "top 100 sunset views in Japan".

This is a museum dedicated to the Shimabara Rebellion, where the peasants from the islands rose up against the Lords in 1637 to fight for lower taxation and freedom of religion, before being quashed by the much larger Shogunate forces. The museum focuses on Amakusa Shiro, the leader of the rebellion, and good English information is provided. Do watch the 3D film showing the background of the rebellion and influence of European Culture on the islands.

On the other islands 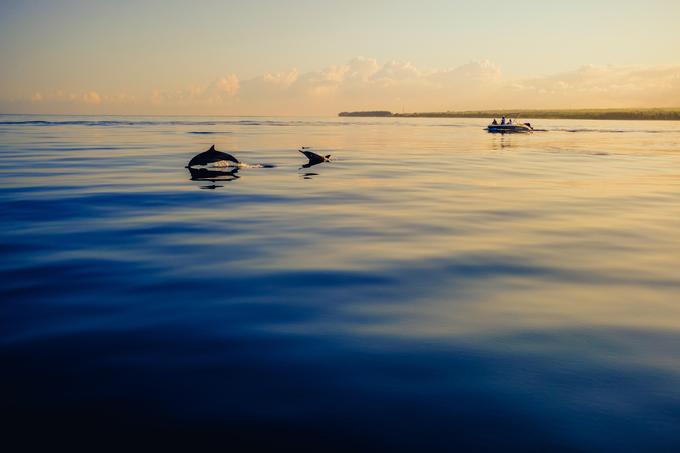 Off the shores of Tsuji-Shima Island near Itsuwa City live around 200 wild Indo-Pacific Bottlenose dolphins. The local fishermen have lived in harmony with the dolphins for hundreds of years and these days offer tours where you can watch the dolphins from a boat up-close and personal. An advance reservation is required, see here: https://www.t-island.jp/en/amazing/dolphins.html.

The Amakusa Saikai Seashore is a Marine Park offering many excellent diving spots, especially in winter. Visitors can enjoy not only scuba-diving but also swimming, kayaking, glass-bottom boat cruises, fishing and of course, dolphin watching. Mogushi Beach is the most famous as it was the location for the NHK drama 'Musashi', but it is well worth its fame with crystal-clear sea and white sand. In May and June you can see sea turtles laying their eggs ashore.

A Geopark is "a region that includes one or more sites of importance - not only geologically but also by virtue of its archaeological, ecological or cultural value". In Amakusa you can travel back one hundred million years in time while learning about the ancient rock formations and fossils found on the islands. The Fossil Collection Site offers a fossil hunting experience, and Benten Island has a real dinosaur footprint on display. It is like a giant open-air museum. Karasu-Toge Observation point offers an amazing 360-degree view on a sunny day so don't miss it. There is a hiking course, a fossil road course and a cycling course. You can see more information on the map here: https://www.t-island.jp/en/amazing/geopark.html

How to get there

By Air: You can fly from Osaka, Fukuoka or Kumamoto

By Train: Take a train from Kumamoto Station to Misumi Port (50 minutes), then take the Amakusa Takarajima Ferry to Hondo Port (1 hour).

By Ferry: You can take a ferry from Kumamoto, Nagasaki or Kagoshima. See details here: https://www.t-island.jp/en/etc/access3.html

By Car: The best way is to drive so that you can explore all the islands easily

Omakase Tour offers a trip planning service where we can arrange your Kyushu/Amakusa trip and take care of all the details for you. Just get in touch for more information!

Four Places in Japan...
home
Why you should visit...