Traditional Japanese Calligraphy Experience with a Master of the Art 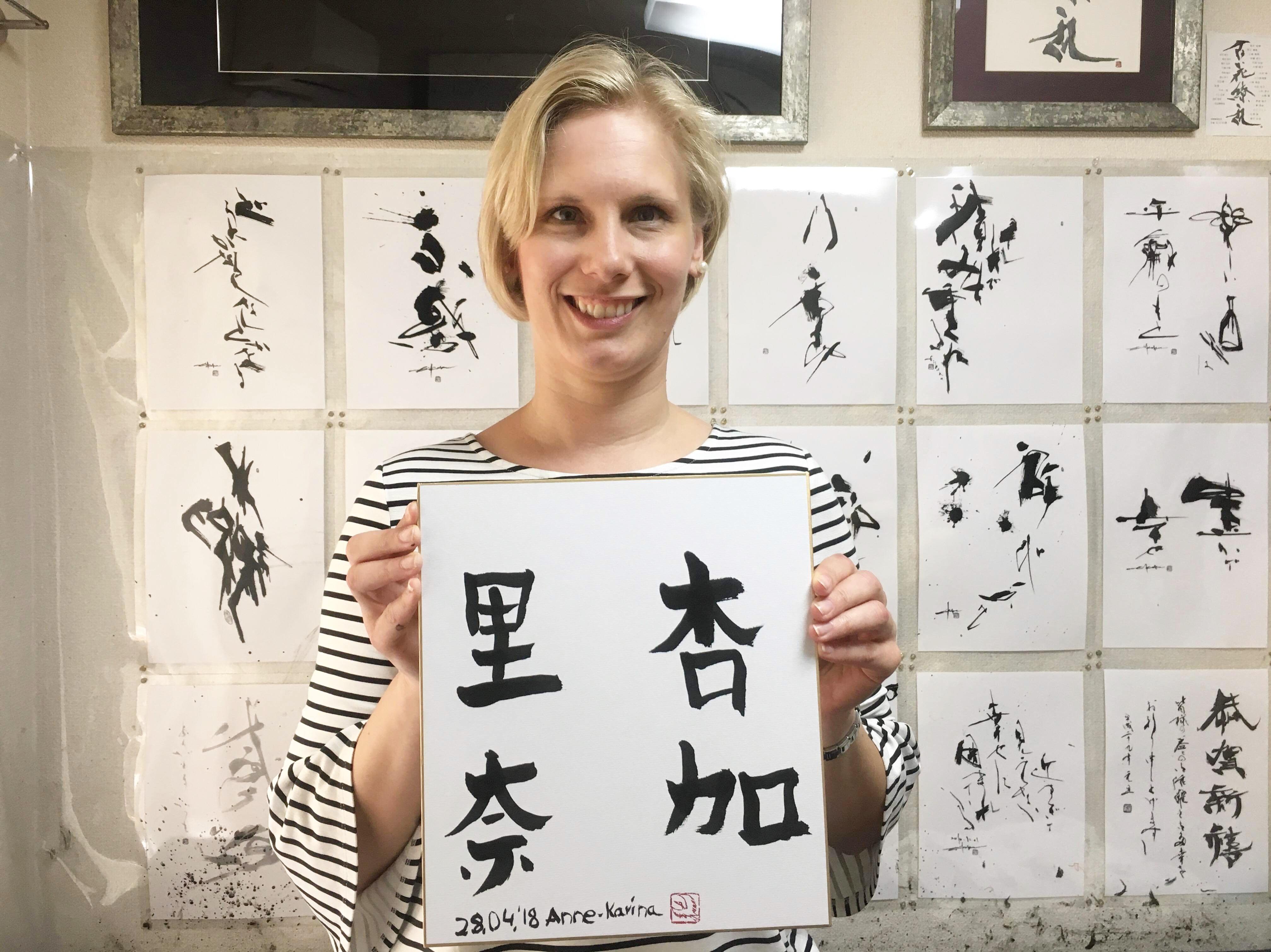 Japanese calligraphy is at the essence of traditional Japanese culture. Why not try your hand at the art?

“Shodo,” or Japanese calligraphy, is artistically written words, written in a style that is both artistic and emotionally driven. The art of calligraphy was handed down from China during the 6th and 7th centuries, at which time the Japanese learned how to make brushes, ink, and paper. Soon after its introduction, it became an indispensable skill for educated nobles and samurai, the leaders of Japan. Over time, the appreciation spread to the general public, and now can be found not only as works of art per se, but also in things such as New Year's cards and other special occasion writings. The art has been fully intertwined with Japanese life.

The calligraphy experience we offer here, under the guidance of the master calligrapher Eikaku Matsumura, will allow you to learn about and then experience calligraphy first hand. Mr. Eikaku Matsumura, known for his elaborate and ingenious style, is extremely well regarded and in high demand in advertising, television, and other fields. He was also a part of the 2011 film "1,778 Stories of Me and My wife,” where he provided professional guidance to the singer and actor Tsuyoshi Kusanagi of SMAP fame. Best of all, Mr. Eikaku Matsumura is a charming and approachable master, sincerely eager to facilitate a unique and memorable Japanese experience for you!

・In cases where five or more people attend, the meeting location is subject to change.

Had a great time with the fam. Two guides that spoke great English picked us up all the way in Shibuya, guided us to the artist's studio and translated the lesson. The expert was patient and taught us the basics and artistic versions of our names in kanji. Highly recommend to anyone for a fun excursion to a place a little outside the busy hussle of the city!

A Great Class for the Whole Family

Our translator Yoko was very prepared and helpful. The calligraphy instructor was knowledgable, talented, and very funny. We worked hard and ended up creating some great wok. Our 9 year old daughter got to work on her name and other phrases and had a wonderful time. If you are interested in learning something about Japanese culture, this class is informative and educational.

Great experience! The tour guide was lovely. The teacher an artist, with great knowledge and patience. They discover that was my birthday and sang happy birthday, and gave me a beautiful gift. Thanks to everyone, that made it possible.

A must do cultural experience.

A must do cultural experience if you're travelling to Japan! Our guide Yoko, who took us from the railway station to the Master's studio and back again, was extremely helpful and knowledgeable. It was such a once in a lifetime cultural experience, being a beginner to learn about calligraphy from a Master first hand. It was a happy atmosphere and the Master was very kind and patient with us. We can't wait to show our family and friends what we achieved, and have it framed!

The master and his work is amazing. He has so much patience and a good personality to instruct students in creating calligraphy. We got to keep our work which was a nice souvenir.

The master was very talented, and wonderfully supportive and fun, helping us create a terrific souvenir and an incredible experience. Something unique and memorable, and a highlight of our Japanese holiday. Our guide and translated Yoko was also very sweet and helpful. Thank you both so much!

Sachiko is an excellent guide. Such good English and helpful, patient personality. The time we spent with Matsumura was humbling, unforgettable, and beautiful. We have committed ourselves to practicing the new skill and attitude to this art every week for the next year until we have learned as many Japanese characters as possible and can write them in the calligraphic style.
I recommend this experience to anyone who wishes to do more than "see something" in Japan, but to create lasting and deeply valuable memories.

We were greeted warmly at a nearby train station by our local translator. The calligraphy teacher was very pleasant to work with. He showed us some basic movements and guided us through the whole process. He explained why the movements were done the way they were. We were given photographs and a video of us writing our chosen word. I would recommend this experience to anyone wanting to do traditional Japanese calligraphy.

We had a great afternoon learning some traditional Japanese calligraphy whilst here in Tokyo. Our guide Sachiko was awesome, very helpful and enthusiastic! So were the teachers, it’s not as easy as it looks! Worth trying for something different and off the beaten track!

Two hours with a Japanese Calligraphy Master in Tokyo

I spent two hours with the Calligraphy Master. The writing was difficult - of course - but also fun. I enjoyed it thoroughly and can now write "happiness" in a shaky Japanese character. For anyone interested in calligraphy and/or Japanese ink and brushes, this is a rewarding experience. Grab it if you can! I also enjoyed the company of a guide/translator who, on the way to the Master, explained a lot about Japanese life and culture. She also answered my questions (so many after three weeks in Japan). All in all a very Japanese and interesting afternoon!

We stayed about two weeks in Tokyo and had a lot of impressive insights in Japanese culture. One of the highlights has been this calligraphy session. It started with our guide Sachiko waiting for us patiently for a pick up at the railway station (sorry again for being late 45 minutes on our side!). Afterwards Matsumura Eikaku showed to us his philosophy of artful writing. This ranged from writing traditional Chinese letters to a presentation of a personal artistic way of doing calligraphie that literally took our breath away. We will do our best to conserve this special awareness of creating letters and promise to write more carefully in our own language. Thank you very much for this wonderful experience as well as for the photo documentation! Warm regards from Vienna, Teresa & Robert