From Hokkaido to Kyushu - Where to See Autumn Leaves

The autumn leaves season generally starts around the end of September in Japan and runs all the way until December. First the Northernmost part of Japan - Hokkaido, succumbs to the cold season, and from there things move South. If you want to follow the splendour of Japan's maples, read on. I will recommend places to see the Autumn colours in each part of Japan.

The leaves in Hokkaido should be peaking in the next week or two, so now is the perfect time to jump on a plane for a quick getaway to Hokkaido. Hokkaido is full of beautiful nature, from the bear-filled forests of Shiretoko to the peaceful farms in the Tokachi Plains. But where to see fall leaves?

Daisetsuzan is a mountainous region in Central Hokkaido, a national park full of hiking courses where you can spend several days. The easiest route is to head to Mt. Asahidake. From Asahikawa Airport it is just a one hour bus ride to the Sanroku Ropeway Station. Take the ropeway up the mountain and you'll have a stunning view of fiery leaves below you. From the top you can hike around the lake and marshlands in the area. There are several plants unique to Hokkaido so you will definitely feel like you have left Tokyo. While in the area, you could also visit the twin waterfalls of Sounkyo Valley. While there, visit the onsen town of the same name (Sounkyo Onsen).

For a lesser known Autumn leaves spot, try Shikotsu-Toya National Park. Lake Toya in Autumn is this calm blue surrounded by yellow hills and snow capped mountains. Lake Toya is also a famous hot spring area where you can stay in a ryokan right by the water. This area is also a geopark and in the year 2000 the nearby Mt. Usu erupted, destroying nearby buildings, roads and schools. You can actually explore this ghost town on foot, it's really spooky.

Two hours by bus or train from Sendai is Naruko Gorge, one of the most scenic gorges in Japan and a very popular Autumn spot. The best area for viewing is near the Narukokyo Resthouse, but I recommend hiking the Naruko Gorge Walking Trail (only open in some sections due to earthquake damage), and the Ofukazawa Walking Trail, which can be completed in one hour. Nearby is the Naruko Onsen Village with 9 of the 11 types of hot springs you can find in Japan.

Yamadera in Yamagata is another option. Accessing Yamadera involves a hike through a mystical cedar forest and a spectacular mountaintop temple with sweeping views of the surrounding mountains lit up in autumn hues. The temple itself was founded over a thousand years ago and is known to be the inspiration for the famous poet Basho who composed a haiku there about the peacefulness of the area. The best view is from the Godaido Hall, an observation deck extending out over the cliff. Late October to early November is the best time to go. 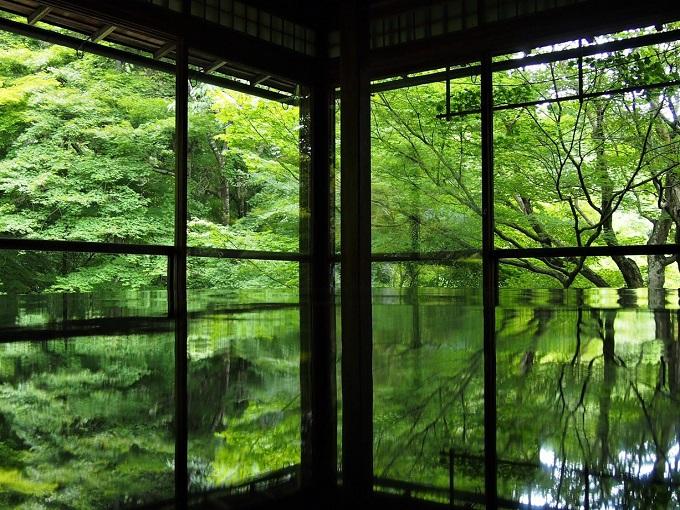 Kyoto is one of the most famous places in Japan for viewing Autumn colours. Temples and Japanese style gardens galore. If you want the PERFECT photo, Rurikoin Temple in Northern Kyoto is your best bet. There are three landscaped gardens filled with maple trees, moss and seasonal flowers, but the highlight is the inside, where you have a panoramic view of the autumn leaves outside, reflected like a mirror in the floor of the hall. You should visit around November 21st for peak colours.

Early November is the best time to head to Mt. Koya for autumn viewing. Spend the entire day in this area, famous for being the centre of Shingon Buddhism and one of the most sacred places in Japan. Start at Okunoin Temple where Kobo Daisha is enshrined and from there choose to explore other shrines in the area or simply walk around enjoying the forest paths and nature.

Kanto is the home of Tokyo, meaning Autumn foliage spots will be most packed here. I excluded the most obvious places from this article in place of quieter options.

Take a day trip from Tokyo to Ibaraki where you'll find the Hananuki Valley. This valley contains many rivers and waterfalls and the famous Shiomidaki Suspension Bridge offers excellent views of the entire valley. Walk from Hananuki Dam to Namerigafuchi and don't miss the Shiomi Waterfall. What is nice here is that the tree branches hang right down to the river, making an extra vibrant Autumn scene. There will be some crowd around the bridge, but the further hiking trails are usually quite quiet! The best time to see the Autumn colours is in mid-November.

Another option is Mt. Horai in Tochigi. It is a sacred mountain containing a shrine that was founded by the same Buddhist priest who founded the Nikko Futarasan Shrine. During Autumn the trails are filled with beautiful red, orange and yellow trees, with little streams tinkling nearby. The Maboroshi-no-taki (phantom waterfall) is a must-see spot. It's best to visit in late October to early November.

In the Northern Japan Alps lies the forested ravine of Kurobe Gorge, filled with steep cliffs and outdoor onsen. You can ride the Kurobe Gorge Railway, a sightseeing train which passes through 40 tunnels and 20 bridges during its 80 minute journey, offering panoramic views of the gorge below. From Keyakidaira Station, the terminal station of the Kurobe Gorge Railway, various walking trails and sights can be found, such as the 34m tall Okukana Bridge or the Sarutobikyo gorge. Autumn colours can be seen all the way from mid-October to mid-November.

Winter and summer in Niigata are vastly different, from scorching summers to towering snowfall in winter. This means that their Autumn is also something to behold. You can spend several days exploring all of the fall leaves offerings in Niigata. One recommendation is Lake Daigenta, best seen in late October. There is a 1.5km trail circling the lake, from which you can enjoy the foliage during your easy and pleasant stroll. You can also rent a rowboat for some added fun.

The Gokei Valley lies between Okayama and Kurashiki Gorge and is a nationally designated place of scenic beauty, famous for its unusually shaped large rocks and stone pillars. There is a 600m promenade through the forest from which you can stroll along while enjoying the fall leaves. The best time to visit is from early to late November. While in the area, also visit the Hofukuji Temple which is only 3km away.

Then there is the Chomonkyo Gorge, a picturesque ravine in Yamaguchi which is a part of the Chugoku Nature Trail. The Abu River runs through the gorge and is a well-known place amongst locals for autumn colours. There is a 5.5k hiking trail which runs alongside the river and is relatively flat and easy. You'll walk past clear streams and interesting rock formations, although the highlight is clearly the forest, designated as one of the top 100 forests in Japan for forest bathing and fully ablaze in Autumn season, which is early to late November.

One of my favourite places in Shikoku is the Iya Valley, an isolated mountainous area with some extremely perilous roads, and extremely serene scenery. It's famous for vine bridges, hot springs, hiking, rafting and ziplining, and a cute little almost-abandoned village populated by scarecrows. In the Autumn, the entire valley turns red and yellow and creates a vivid contrast against the emerald green of the valley's river. You'll want to visit between late-October to mid-November to catch the fall leaves.

Another notable gorge is the Besshi Rhein, a 10km gorge whose name originates from Germany's Rhein River which is said to be similar. You start at the Shoji Bridge which is a nice photo spot, then head to Minetopia Besshi, an old copper mine turned small educational amusement park. The highlight there is definitely taking a ride in the old mine cart. From there visit Shikamori Dam, Otoshi Gorge, Kiyotaki waterfall and end in Kawamata. In Autumn the landscape is quite picturesque, with giant rocks surrounding crystal clear streams in a fairly non-touristy area. It is best to have a car to explore this part of Ehime though as public transport isn't great. The best time to visit is early-late November.

Yufuin is a famous onsen town located near to Beppu in Oita. It has many trendy cafes and boutiques set in a traditional old town landscape. First you can explore the main shopping street, then leave this bustly area behind and head into the hot spring and mountain area on Mt. Yufu where you have a panoramic view of the scenery below, as well as nearby Lake Kinrinko which has a walking path surrounding the lake and is the highlight of the fall colours. Early to mid-November is the best time for this spot.

If you're a fan of pottery, Saga is one of the best places in Japan to visit. While you're there, the Kunenan Gardens will provide you with a beautiful Autumn photo spot. It is a residence styled after a traditional Japanese tea house, surrounded by a Japanese style garden. It's usually closed to the public, but for about nine days during mid-late November they open their gates and welcome people for their stunning display.