Over the Golden Week Omakase Tour's Takeshi and Chiharu went to Nikko, a very popular tourist destination in Japan that many people visit on their first trip to the country. Here is their three day, two night sample itinerary. We hope you find inspiration!

Make your way to Nikko. Takeshi took the Tobu Express Liberty Kegon train from Asakusa to Tobu-Nikko Station, but use Hyperdia to check the best option for you. Before traveling, consider if any of these special train/bus passes will suit your itinerary. 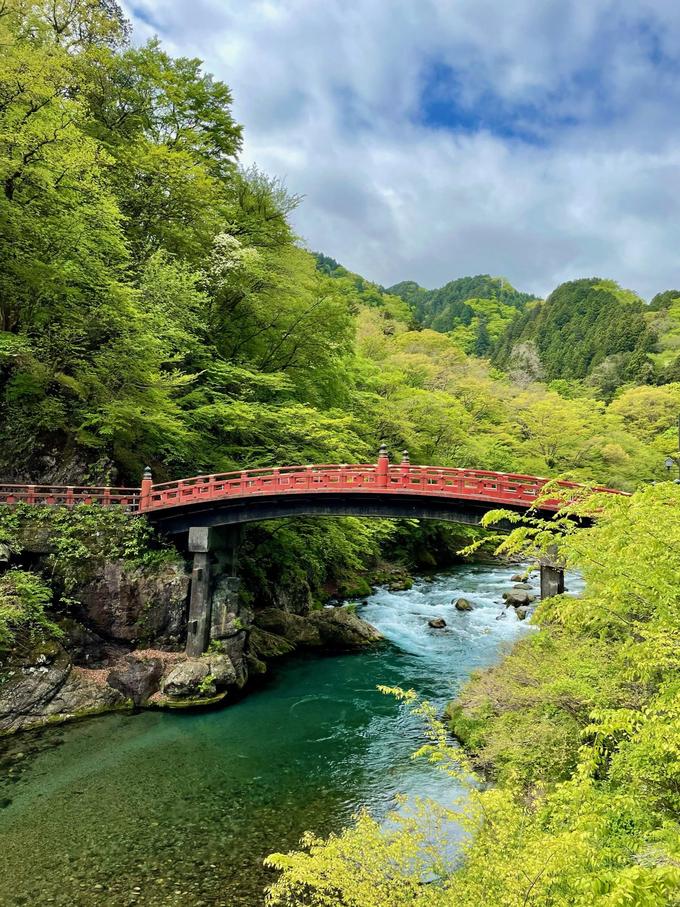 Take the bus bound for Lake Chuzenji for 5 minutes, or walk 20minutes, to Shinkyo Bridge. This iconic red bridge features in many travel guides about Nikko and is the gateway to the sacred shrines of Nikko. You can cross the bridge for a fee, but the best photo comes from off the bridge. 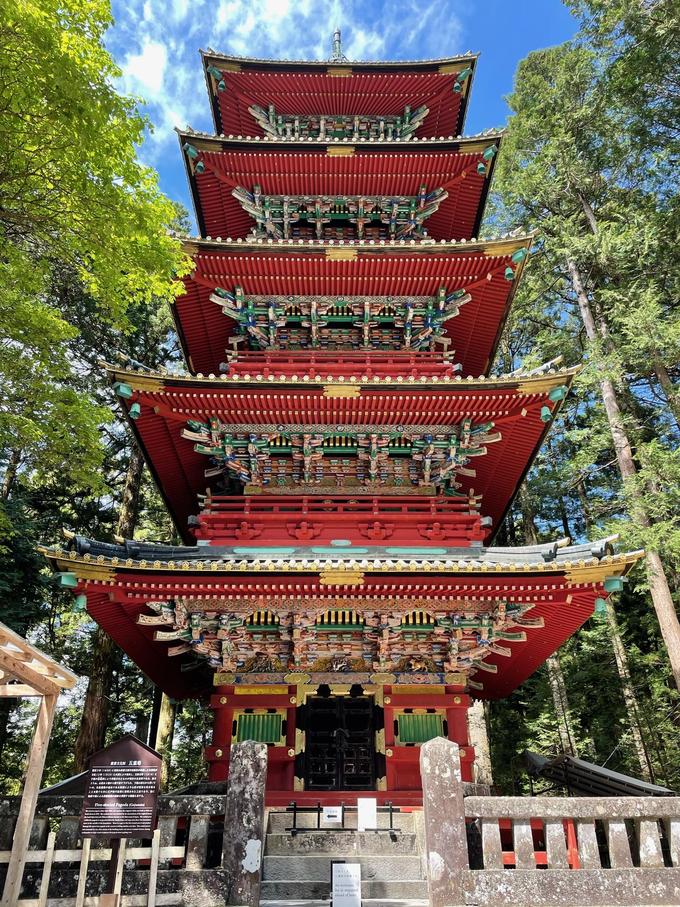 From the bridge, walk to the acclaimed Toshogu Shrine, one of the most well-known shrines in Japan. Perhaps you have heard of its "see no evil, hear no evil, speak no evil" monkeys. The shrine is the final resting place of Tokugawa Ieyasu who was the founder of the shogunate which ruled Japan for over 250 until 1868. It is a lavishly decorated shrine with gold leaf and intricate carvings covering the entire complex. Even better it is nestled in lush green woods, really adding to the ambience. This is a very tourist shrine so don't expect an eerie mystical place, but this is really a "must see" for any tourist. 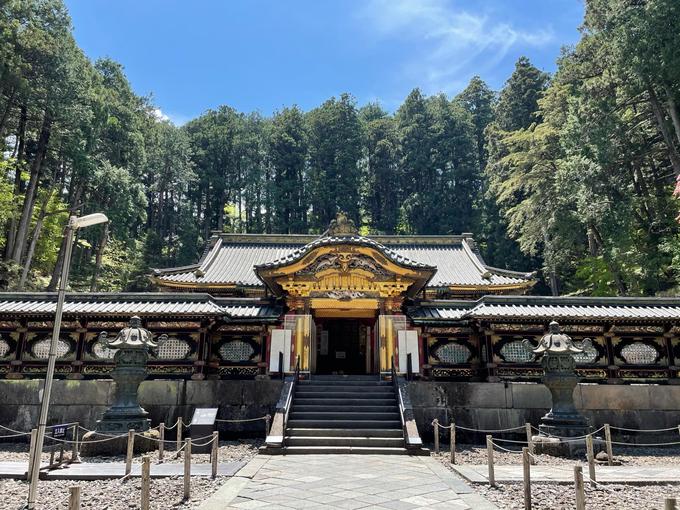 200m to the West of Toshogu is the Futarasan Shrine - walk there. Futarasan is much older and less lavish than Toshogu, having been founded in 782 by the same monk who introduced Buddhism to Nikko. Futarasan Shrine is dedicated to the deities of Nikko's three most sacred mountains: Mount Nantai, Mount Nyoho and Mount Taro. You can walk around the grounds for free, but if you want to access the forest garden or see the main hall up close you will need to pay 200 yen. 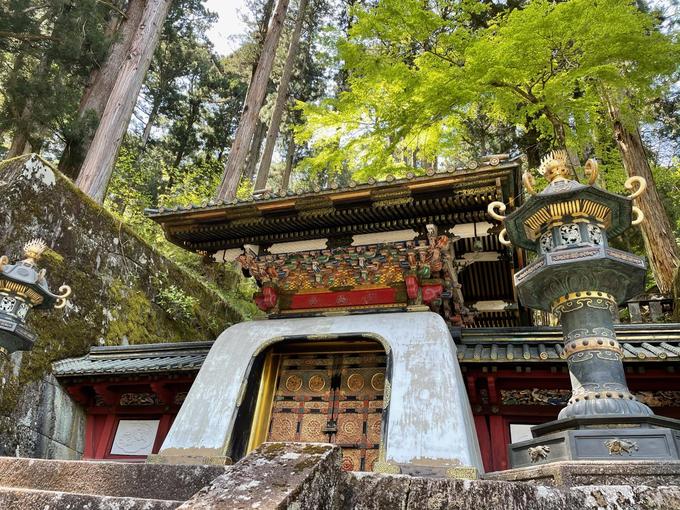 Nearby is the Taiyuin Temple, otherwise known as the Iemitsu Mausoleum. It is the mausoleum of Tokugawa Ieyasu's grandson Iemitsu. Like Toshogu Shrine, it is lavishly decorated, although more modestly as it was not meant to eclipse the shrine of the grandfather. In the past many religious buildings in Japan incorporated both Shinto and Buddhist aspects, and this shrine is one which still retains its mixed heritage. 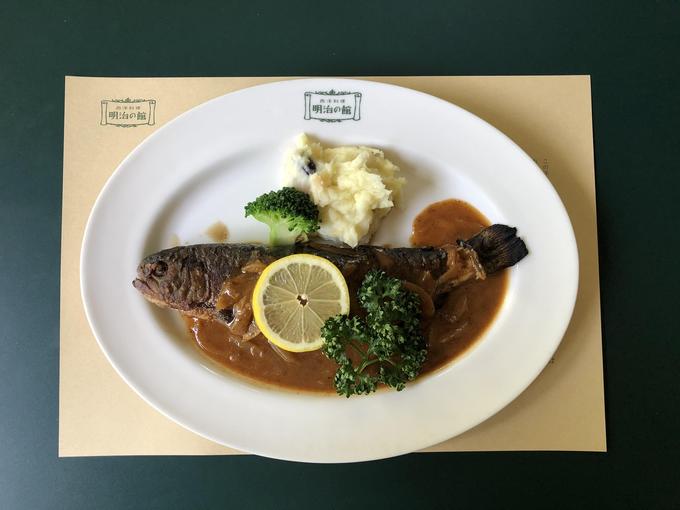 After all these temples you probably worked up an appetite, so walk to Meiji-no-Yakata for lunch. Meiji-no-Yakata is a restaurant located within the "Nikko Fudouen" - an ancient site with a 1,200 year history where the Fujimoto Monastery belonging to the Nikkosan Rinou Temple used to stand. The restaurant is housed in an old Western style building from the Meiji era, when Western influence was big in Japan. This cottage was originally built as a residence for an American trading merchant. They serve a "Western style" Japanese cuisine and have a large outdoor terrace where you can eat. 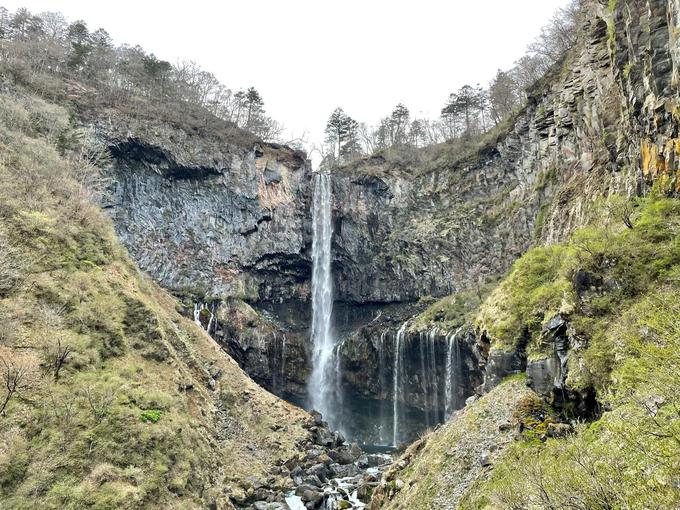 Now head to the bus stop and get on the bus bound for Chuzenji Onsen, and take it for about an hour to Kegon Waterfall. This is the most famous of the many waterfalls in Nikko and thunders down the rock face from 100m high. It is actually ranked as one of Japan's three most beautiful waterfalls. You can view the falls from a free observation platform or a paid platform at the base of the falls. If you have time you could go to the Akechidaira Plateau and take the ropeway to the Akechidaira Observatory when you have a good view of the falls and Lake Chuzenji together. When going in Autumn, beware huge traffic jams due to the popularity of the area.

We recommend booking a hotel near Chuzenji Lake to sleep in. 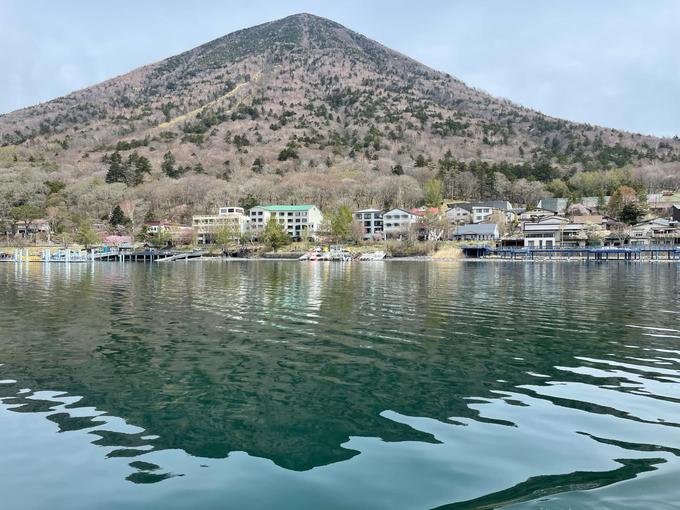 Lake Chuzenji is a picturesque lake which sits at the foot of Mount Nantai, the sacred volcano of Nikko. On the Eastern shore of the lake is the hot spring town of Chuzenji Onsen which is where you likely spent the night. From this onsen town you can catch a sightseeing boat from which to enjoy the lake. It is a one hour round trip which costs 1,400 yen. 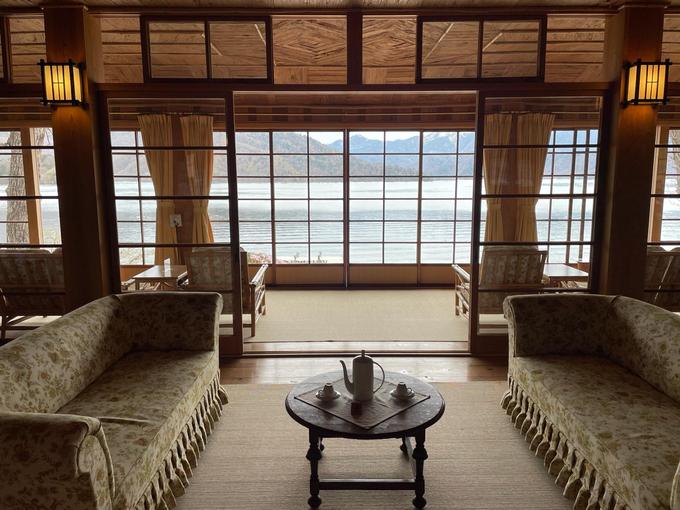 After the boat cruise you may be interested to head to the British Embassy Villa Memorial Park. This can be reached by a 35 minute walk or the bus bound for Mt. Hangetsusan. In the Meiji and Showa Periods, the Chuzenji Lakeside came alive in Summer as an international resort, where many embassies and foreign diplomats built villas. The British Embassy Villa Memorial Park was built in 1896 as the private villa of Ernest Satow who was a British diplomat and was used as a villa for the British embassy until 2008. As well as a small museum, the villa offers stunning views of the lake and a British style tea room with a view. 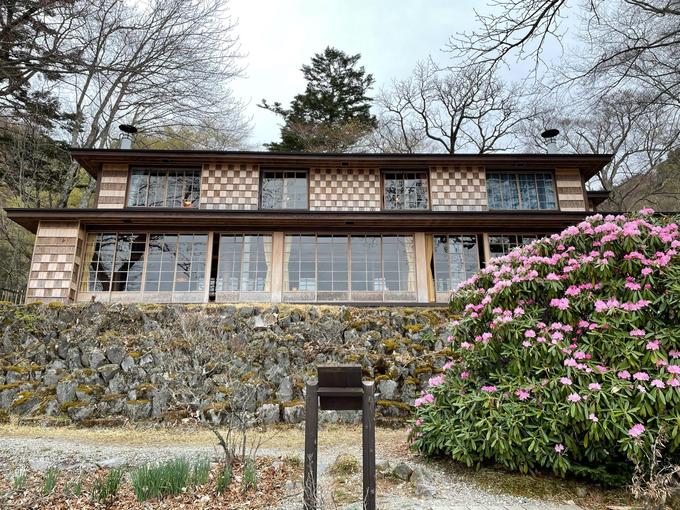 Similarly, you can also visit the Italian Embassy House Memorial Park at the same time. This was built as villas for Italian Embassy in 1928 and used by the successive ambassadors until 1997. The architecture of the main residence was designed to be in harmony with the natural environment and is quite interesting looking. They also have a museum and cafe on premises.

Head back to the main Chuzenji Onsen area and have lunch if you haven't already done so. Takeshi enjoyed "Restaurant Taro", but there are many places to choose from in the area. 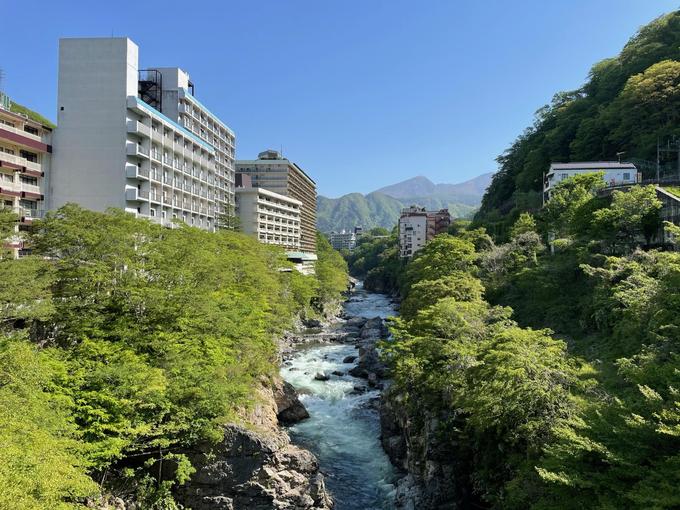 After lunch, take the bus back to Tobu-Nikko Station and then take the Tobu Line to Kinugawa Onsen (30 minutes). If you decide to go to Kinugawa, remember to check the various Tobu Passes offered as some cover the travel between Nikko and Kinugawa.

Head to your hotel and check in. If you have time you could stroll around the town and maybe take a Kinugawa Line Kudari River Cruise which is a 40 minute cruise down the river in old fashioned wooden boats.

Kinugawa is an onsen town which like nearby Atami was booming in the bubble period, meaning that many very large facilities were built here to house the masses of large groups that would visit. Due to its proximity to Nikko it still remains popular today, and is the perfect base for visiting some nearby attractions. 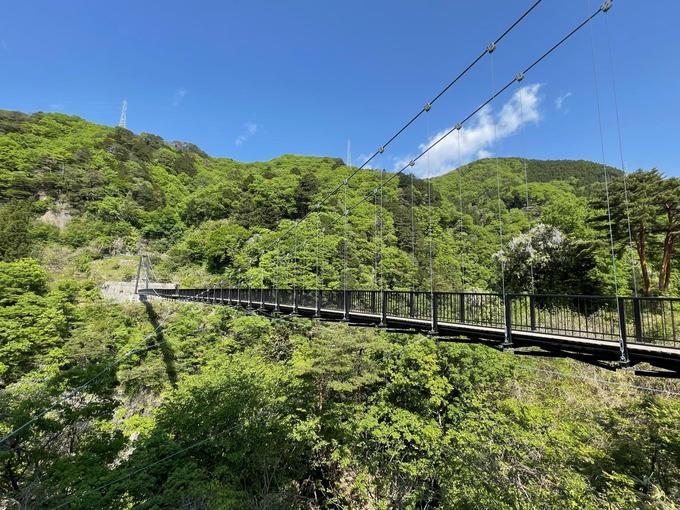 If you didn't have time the night before, stroll around Kinugawa Onsen town. Be sure to walk to the Fureai Bridge to see a nice view of the Kinugawa River. The Kinutateiwa Otsuribashi Suspension Bridge offers stunning views of the emerald Kinagawa River, and Cafe ESPO nearby allows you to see the river from a more stable viewpoint, with the added bonus of a refreshing drink. 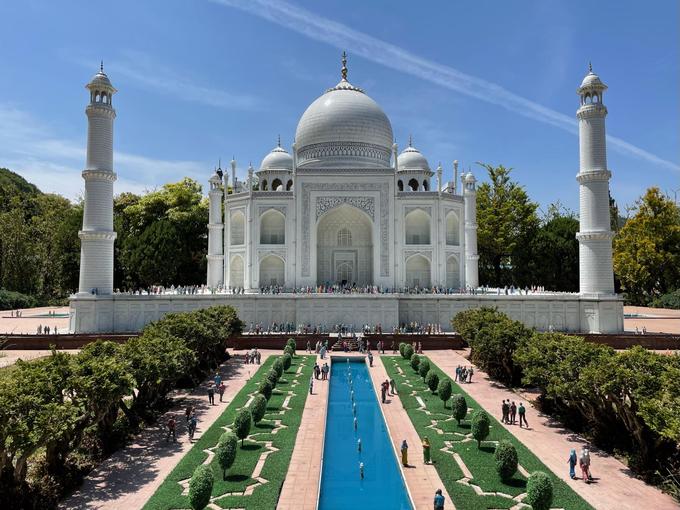 After the bridge, take a Tobu bus from the main station to Tobu World Square, it takes 5 minutes. Tobu World Square is a small themepark which exhibits replicas of famous buildings from around the world. They look extremely realistic and it's quite fun to "travel the world" in miniature. If this doesn't appeal to you, the Edo Wonderland Nikko Edomura might be more up your alley. It is a themepark which recreates life in Japan during the Edo Period (1603-1868). All the architecture is Edo style, all the staff are dressed in character and they have fun things like a Ninja trick maze, a house of illusion and the grand ninja theater. If you go here, definitely try the Grand Maze Palladium which is just across the road.

After you have had your fill of themeparks, head back to Tokyo on the Tobu Express Train.