Where to See Autumn Flowers Near Tokyo

We all know that Japan is famous for its fall hues, those beautiful orange, red and yellow maple leaves peppering the country from October to December. Did you know that Japan also has many flowers that bloom in the Autumn that are worth a trip? Here are some places near Tokyo to check out.

Cosmos flowers are known as the cherry blossoms of Autumn, and are seen across Japan as they grow easily without much care necessary. There are so many places to see them, but here are some highlights. 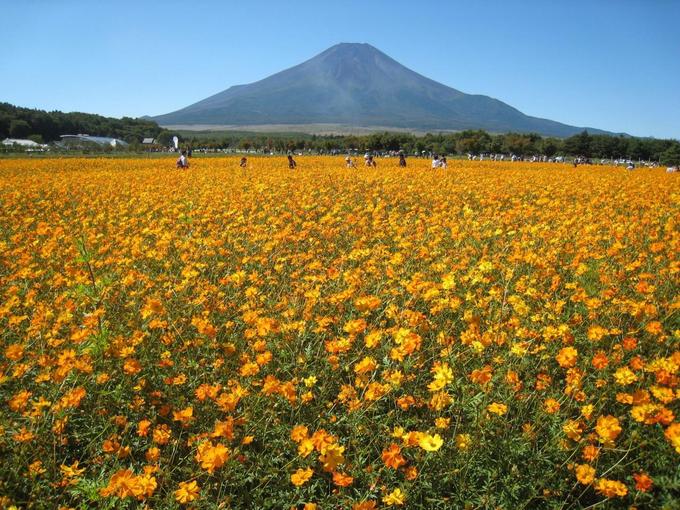 The Hana-no-Miyako Koen near Lake Yamanaka is one of the most spectacular places to see cosmos. This is mostly due to its unique backdrop - Mt. Fuji towers over the flower fields. The flowers will only last until mid-end October, so next weekend is probably your best chance. You can combine this with a trip to the other Fuji Five Lakes, including the kochia fields at Oishi Park (see below). 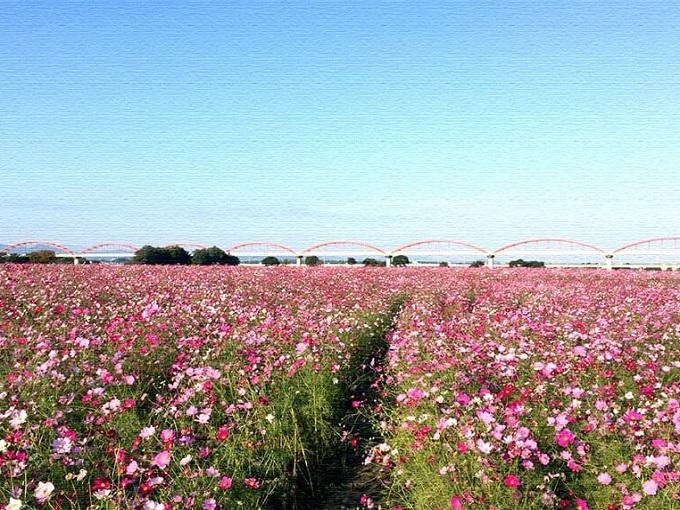 Every year 12 million cosmos flowers bloom in Konosu City in Saitama. Usually they hold a festival with stalls and live music, however due to the ongoing Covid 19 situation, the festival will not take place this year. However you can still see the flowers, but in a much smaller capacity. This is perhaps not recommended for 2020, but 2021. 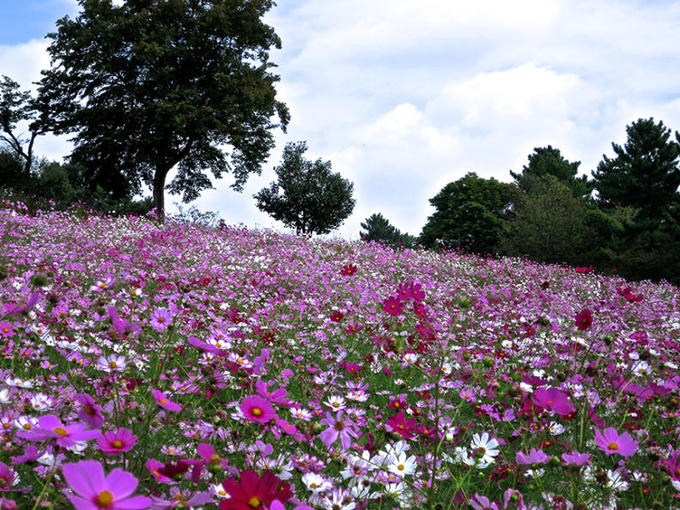 Showa Kinen Koen is located in West Tokyo, in Tachikawa. It is easy to reach from Shinjuku and despite being just a park, is big enough for you to spend the entire day in. They have bicycle rentals, many kid's playgrounds and of course, thousands of cosmos flowers. There is also an IKEA next door if you fancy a visit. 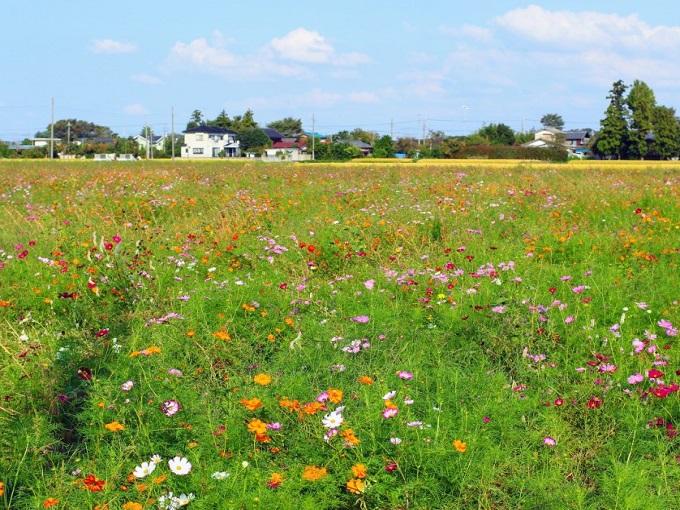 Yoshimi City in Saitama is home to about 8 million cosmos flowers. They hold a festival every year, but it is cancelled this year. In years it is held, they even have a hot air balloon ride available so you can see the flowers from a bird's eye view. You can visit the "Yoshimi 100 caves" while you are in the area if you're interested in history. 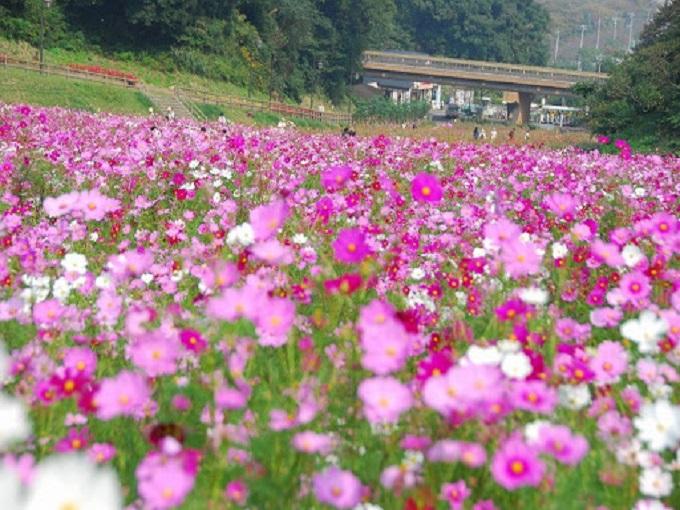 The Kurihama Flower Park is located in Yokosuka, Kanagawa and is thus a popular choice for the military families living in the area. It is a large park with many playgrounds and flowers, but in the Fall season the cosmos are the highlight. There are about a million flowers on display in the bottom section of the park. Kids will probably be more interested in their giant Godzilla slide however. 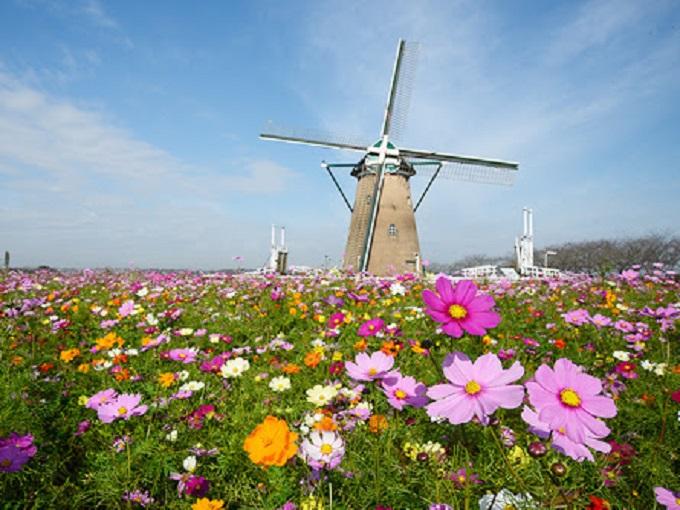 Sakura City in Chiba holds an annual cosmos festival with over 500,000 blooms. The flower fields look quite idyllic with a large Dutch style windmill providing a cute backdrop. You have until the end of October to visit and you can pick your own flowers for a small fee. Sakura actually has a long history dating back to the Kamakura and Muromachi periods when it was home to the area's clan leaders, so you can visit several old samurai residences and historic homes at the same time. It also has one of Japan's most important art museums, the Kawamura Memorial DIC Museum of Art . The 1,000 works of 20th-century art include works by both Japanese and international artists including Picasso, Chagall, Magritte, and Rothko.

Kochia, or summer cypress, is a stumpy round plant which turns bright scarlet in October. On their own they are not that impressive, but grouped in hundreds they are a sight to see. 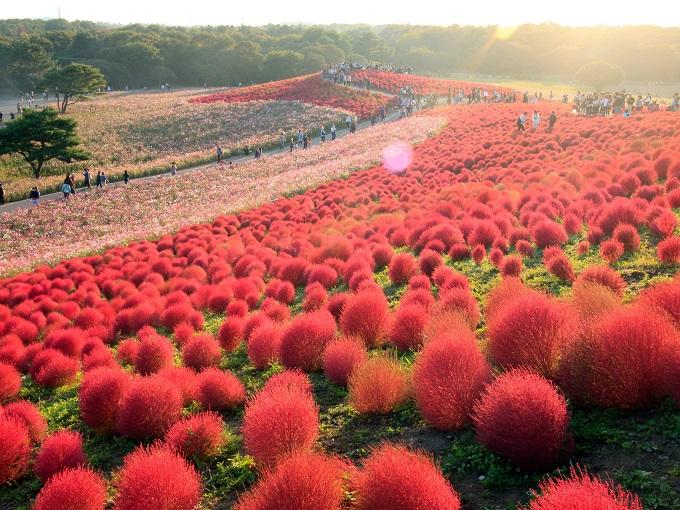 The most famous place to find kochia is Hitachi Seaside Park in Ibaraki. You can make your own way there by train and local bus, or take a bus tour which will also stop at nearby outlet malls. In the park you can see 32,000 kochia bushes making a sea of red over a small hill. You can also rent bikes and explore the rest of the park, and there is a small themepark for kids. 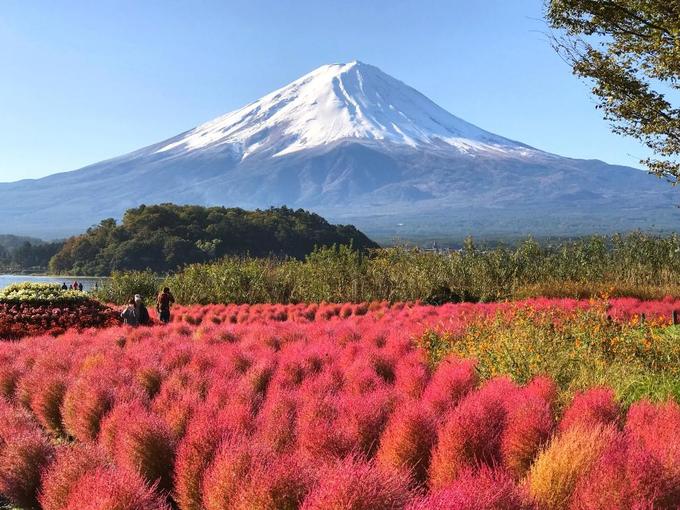 Oishi Park is a small park located on the shore of Lake Kawaguchiko in Yamanashi. You can drive there with your car, or rent a bicycle and cycle around the lake until you reach the opposite shore where the park is situated. It is very beautiful in Autumn as the vivid scarlet plants contrast nicely with Mt. Fuji in the background. You can combine this with the Fuji 5 Lakes are sights and activities. 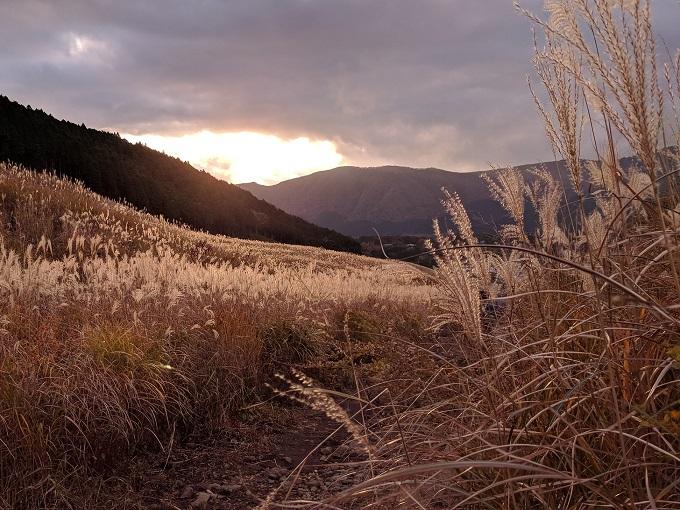 Susuki grass used to be cultivated all over Japan to be used in for thatching roofs but these days is mostly growing wild all over the countryside. A particularly impressive field is in Hakone, in the Sengokuhara fields. You can spend about an hour walking through the golden fields there and soaking up this quintessential autumn flower. From there, do the rest of the things Hakone has to offer. 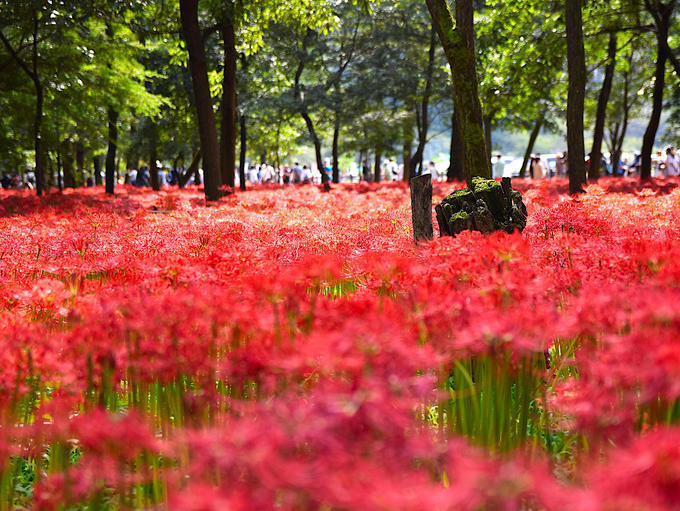 Located in Hidaka City, Saitama (a 15-minute walk from Koma Station which is an hour away from Ikebukuro Station), the red spider lily plants bloom there from mid-September to early October. It is the most famous place to see them, and nearby Alishan's vegan café is always worth a visit (outdoor terrace available). Pay a visit to the Moomin Park in Hanno on the same day. 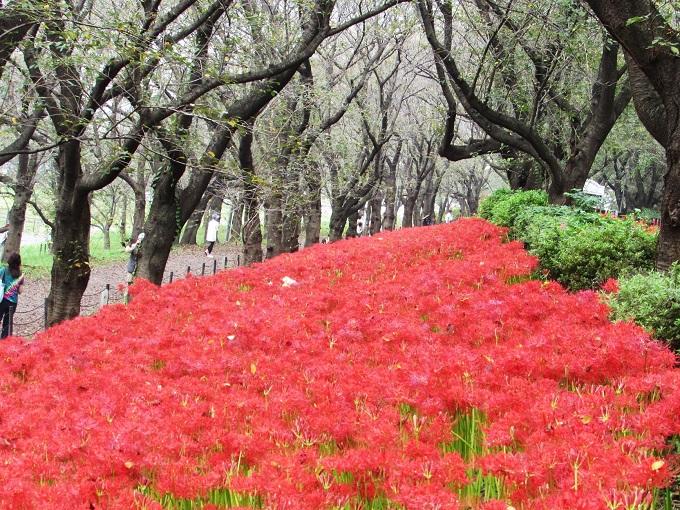 Gongendo Tsutsumi is known as a spot to go to in Spring to see hundreds of pink cherry blossom trees surrounded by yellow rape flowers. It is also a lovely place in Autumn however, as the path is lined with 3.5 million red spider lilies. It's a nice play to relax and have a picnic. 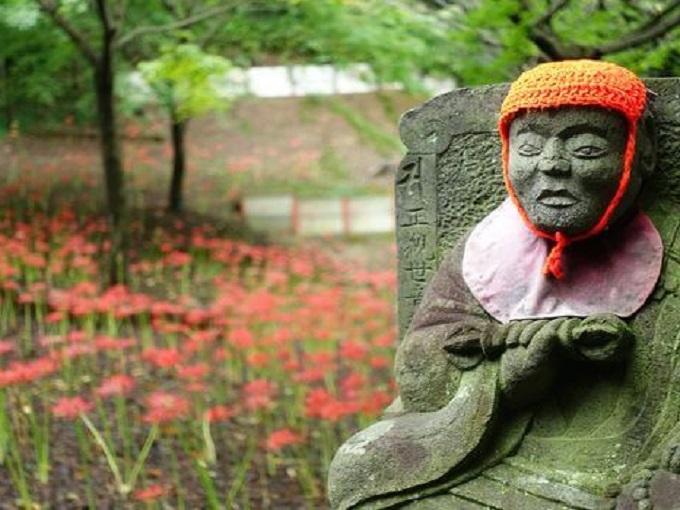 This temple is located in Hino City in West Tokyo. It is famous for hydrangea flowers, but actually they have many spider lilies too, so it is a good place to visit in October. It is near to Mt. Takao so you could head there afterwards, or continue on into the Okutama-Chichibu National Park (more doable if you have a car) for some hiking. 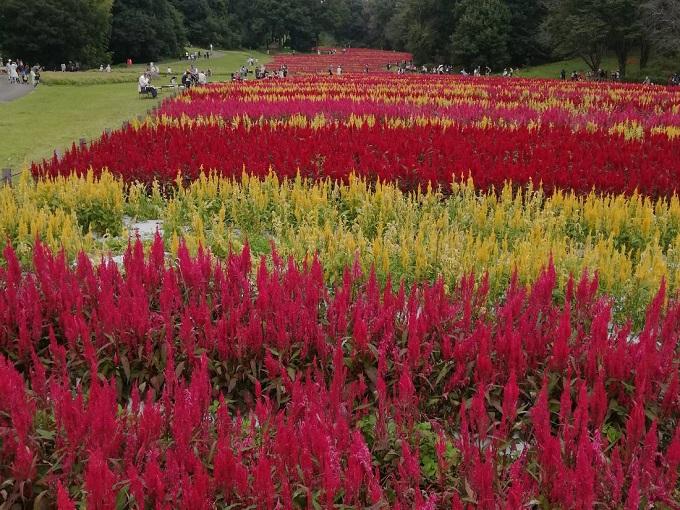 Shinrin Koen in Saitama is a huge park designed for bicycles, where you can spend the entire day cycling their trails. It has a giant playground, athletics fields and several flower gardens. In Autumn they feature the colourful cockscomb flower, but in the same area also display spider lilies and kochia (and usually cosmos but not in 2020).

Chrysanthemums are considered to be one of Japan's national flowers due to their association with the imperial family. They appear on the Imperial Seal of Japan as well as on the 50-yen coin. A symbol of longevity, there are plenty of festivals dedicated to this Autumn flower. 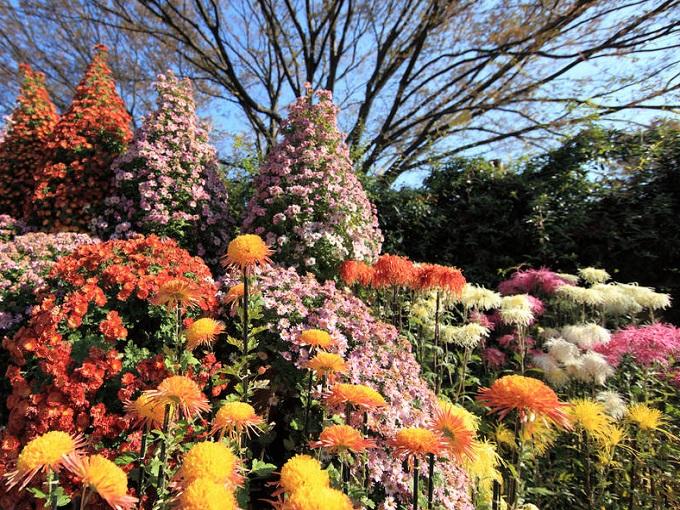 From the end of October to mid-November visit Jindaiji in West Tokyo to see their special chrysanthemum exhibits. Also there is a large rose garden which flowers in this season, the temple itself and Yumori-no-Sato, a small local onsen that is very pleasant at this time of year.

You can also find exhibits at Shinjuku Gyoen and Takahata-fudou (mentioned above).

Roses have two seasons in Tokyo, and one is Autumn. Many places have Autumn rose festivals such as Kyu-Furukawa Teien in Komagome, Hibiya Park, and Jindai Botanical Gardens in Chofu. 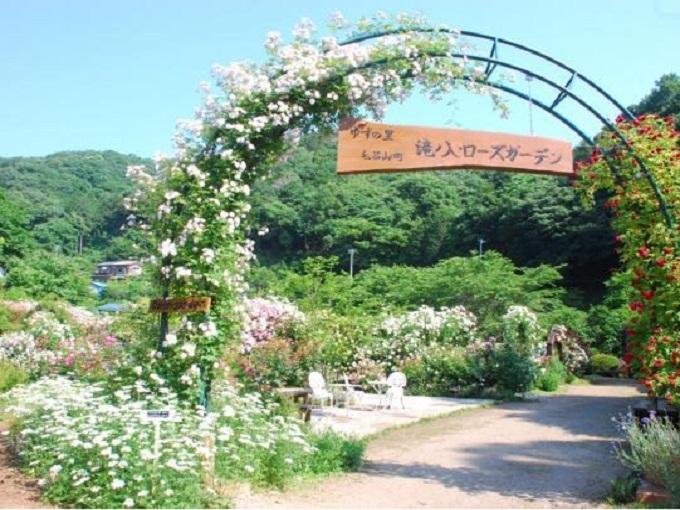 This particular festival in Saitama is not very well known amongst expats. It is home to the Garden Cafe Greenrose, where you can sit in their open air garden and enjoy your lunch surrounded by aromatic roses.

The Go To Travel Cam...
home