Nara - The First Capital of Japan

When you think of Nara Prefecture, the famous deer park probably immediately pops into your mind. That is where most tourists visit, the deer park and giant Buddha of Todai-ji on a day trip from Kyoto. Due to this, Nara is ranked last at present time (47/47) amongst the Japanese prefectures for revenue from foreign tourists. I find this quite a shame as the rest of Nara is wonderful. I will introduce some other, lesser known spots in Nara that I visited over this past week. 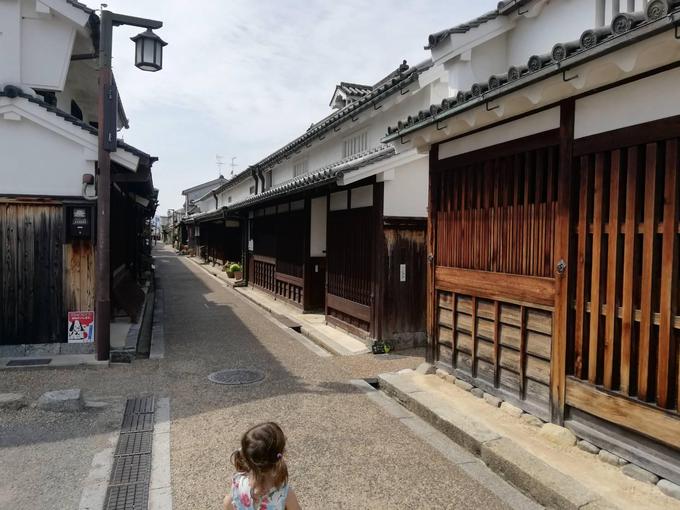 Imaicho is a preserved old town with over 500 historic buildings from the Edo period. It is one of the larger old-fashioned districts that I have been to in Japan and is beautifully preserved; there are very few signs of modern life. The little streets are numerous and it feels a bit like you're inside a labyrinth. We saw inside a traditional sake brewery and tried some delectable homemade cherry ice cream. Usually you can enter inside some of the old houses and look around, but due to the coronavirus you had to make a prior reservation which we did not. According to a local shopkeeper, not many foreign tourists visit Imaicho, which is surprising considering how beautiful it is. There is very little English information available in the area though. I recommend either strolling around or renting a bike and going from Imaicho to nearby Kashihara Jingu. 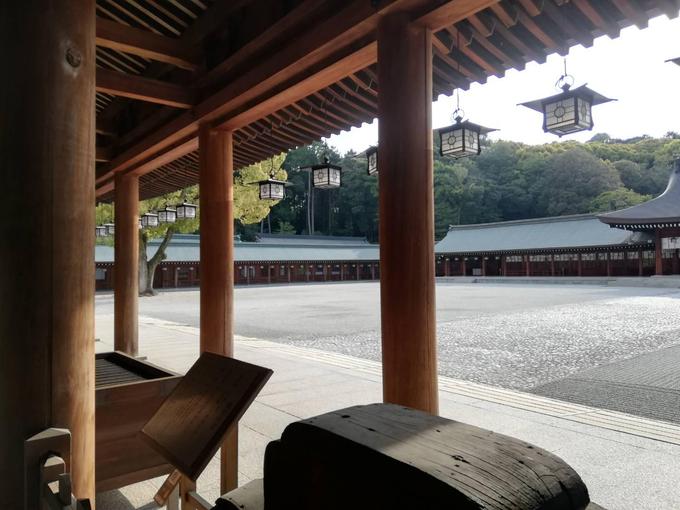 Not being a fan of modern shrines, I didn't expect to like Kashihara Jingu, built in 1889, much. I was wrong. It was built at the base of sacred mountain Mt. Unebi, and exudes a serene and peaceful air. We arrived in the evening's "golden light", when the setting sun cast its orange glow on the shrine. You can spend about an hour exploring the shrine and its grounds. 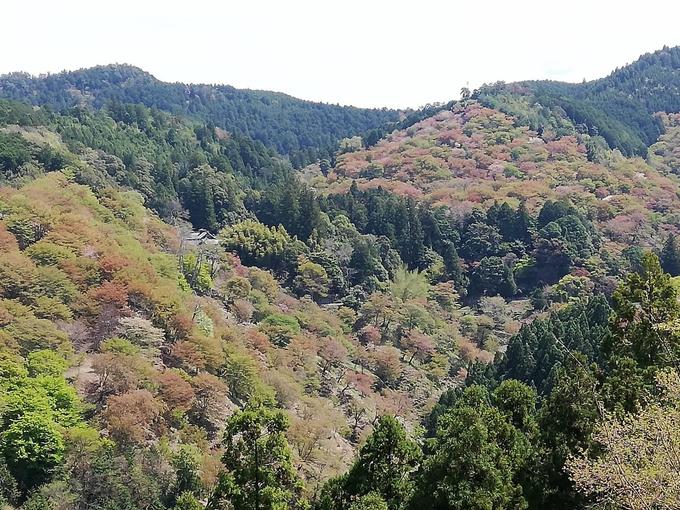 Mount Yoshino is famous as Japan's top cherry blossom viewing spot. More than 30,000 sakura trees cover the mountain and flowers can be seen there for several weeks as the mountain is divided into four areas, with the lower parts blooming first and the top last. The lower area, known as the "Shimo Senbon" area, is a lively touristic shopping street with many restaurants and souvenir shops. We were a bit unlucky in that the sakura bloomed very early this year so by the time we went, they were almost finished - only the very top trees were in bloom. So we missed out on the famous Yoshino cherry blossoms, but it was still a nice area with many parks and shrines dotted around. 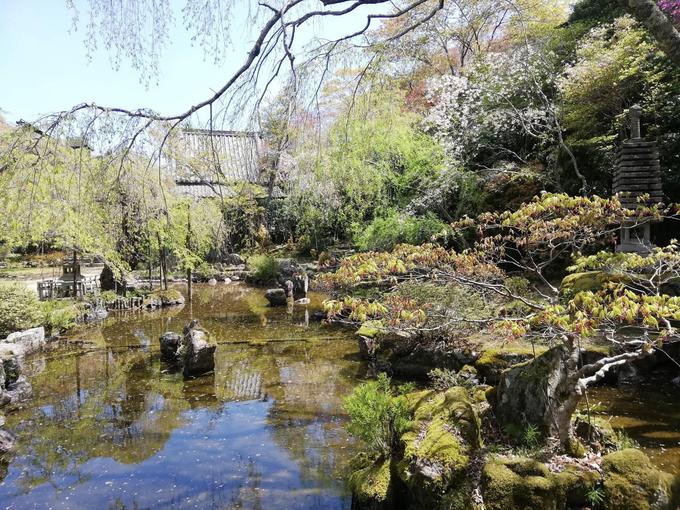 Chikurin-in is a Buddhist Temple halfway up Mt. Yoshino. These days it is also a ryokan - booked out months in advance of sakura season. The garden of this temple was beautiful and serene, no surprise as it was designed by famous tea master Sen-no-Rikyu. I think it would have been spectacular in sakura season, but we just missed it. Still lovely however and I would recommend this garden to anyone.

Yoshimizu Shrine was founded in the 8th century for use as a temple and living quarters for Shugendo mountain worshippers. Now it is used as an exhibit of old artworks and treasures. It cost 500 yen to enter which I found too much for just one small building, though my husband found the treasures fascinating, so history and art lovers may appreciate this most. The view of the sakura hill from outside the temple is worth checking out, and it is free to access. 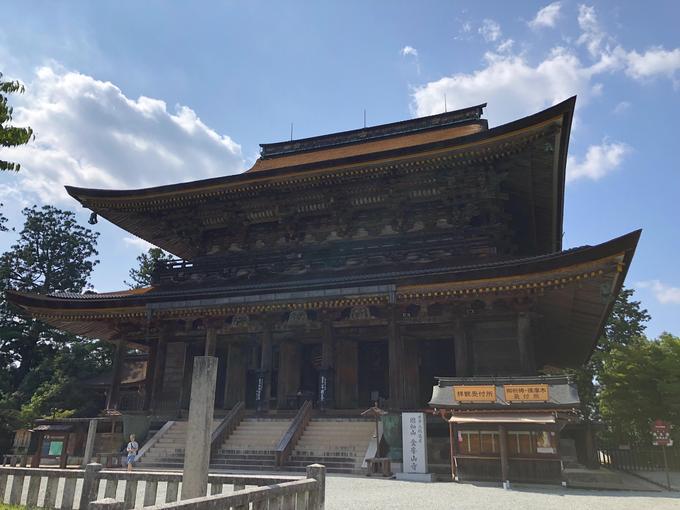 Kinpusenji is considered the best temple in Yoshino and is listed as a UNESCO World Heritage site. Its main hall, the 34 meter high Zao-do Hall, is the second largest wooden structure in Japan behind Nara's Todaiji Temple. They were charging about 1,500 yen to enter the hall so we opted not to do so, instead enjoying its vastness from the outside. Personally I wouldn't spend more than about 15 minutes here, but it was good to see the impressive building. 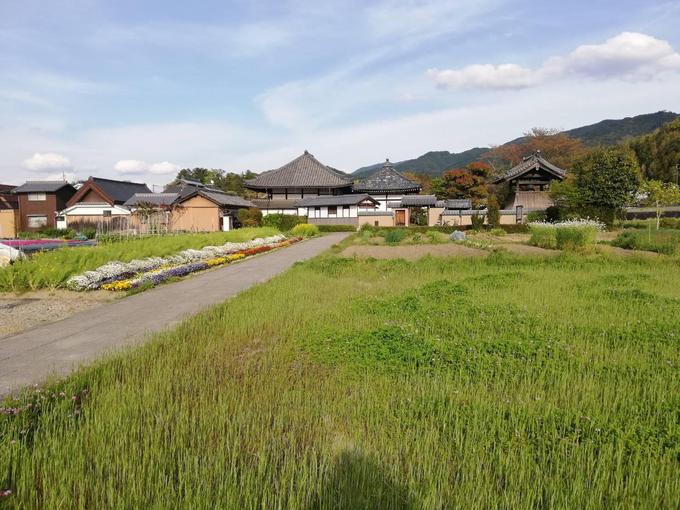 This small temple is considered to be Japan's oldest Buddhist temple. It is located amongst farmland in the town of Asuka, it is a simple, local temple with a very countryside feel. You only need 10 minutes to see it, in fact its surrounding countryside is more appealing - there are farm fields right next to the temple. Definitely come here on bicycle if possible.

The Complex of Manyo Culture is a free museum that was surprisingly good. It contains two free rooms, one evolving exhibit and one permanent exhibit which features lifesize displays and is quite interactive. It even has a "relaxation room" which is not to be missed! 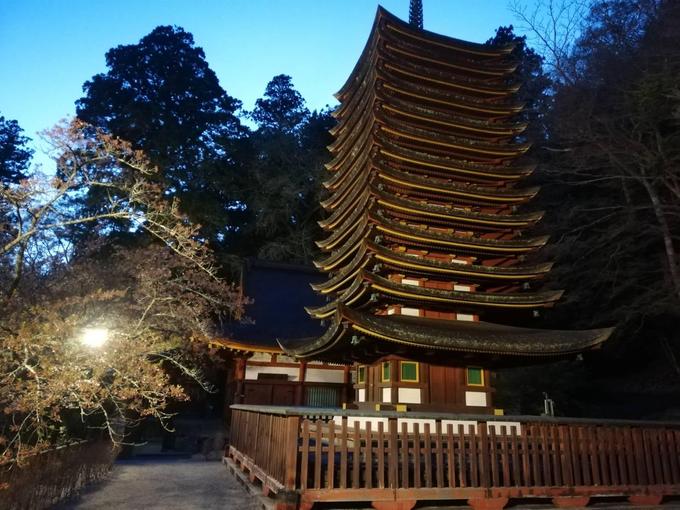 Tanzan Shrine is especially famous for Autumn colours, however this year in order to disperse crowds, they held an illumination event for the sakura season too. It was quite eerie, it is located across from an enormous old hotel which saw its prime in the bubble era, and there was only one other visitor besides from us. It being dark added to the eerie atmosphere. It was an attractive temple with a wooden pagoda and many hanging lanterns. If you want to come for the night time illuminations you'll need a car. 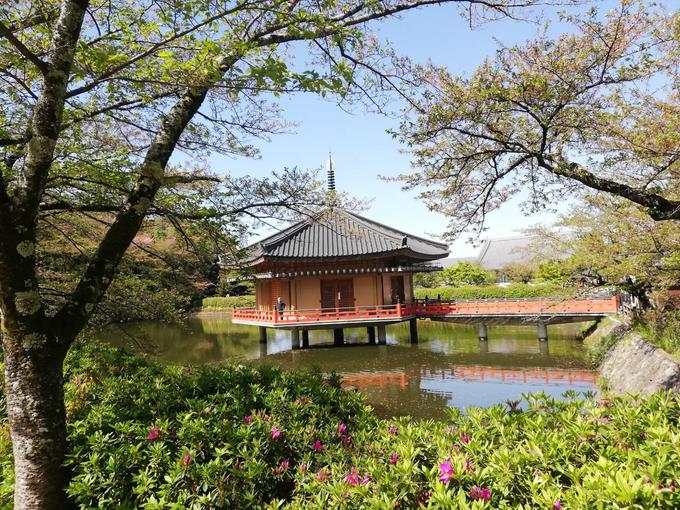 Nestled into the rural town of Sakurai is the Abe Monjuin Temple. It is mong the oldest sites of worship in Japan and there you can see inside two ancient kofun tombs. The floating pavillion is very photogenic and is dedicated to Benzaiten, the god of music. You don't need to spend too long here, just 20 minutes or so. 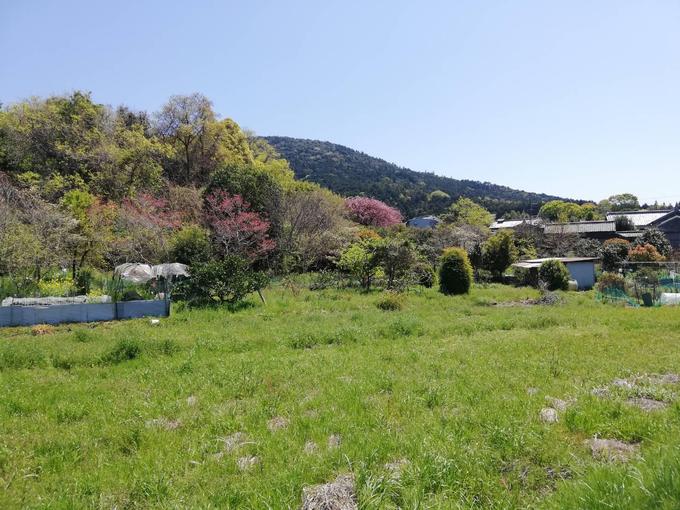 This was the absolute highlight of the trip for me. We started at Omiwa Shrine, which was just a regular shrine, but then from there took a path through the woods leading into the countryside, past farms, wildflowers and streams. We walked about 10km but apparently you can follow this path all the way to the famous Nara deer park. It was peaceful, picturesque and one of the best walks I've done in Japan. For people who love strolling through the countryside enjoying the serenity and flowers, this is a MUST DO. If you get hungry or thirsty along the way, you will find several hidden cafes and lots of produce stalls selling citrus for 100 yen. Katsui Mountainside Restaurant had a wonderful garden for outdoor eating. 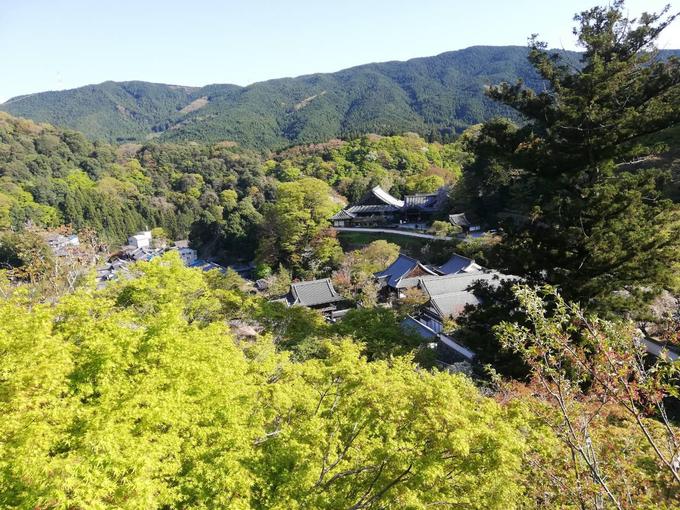 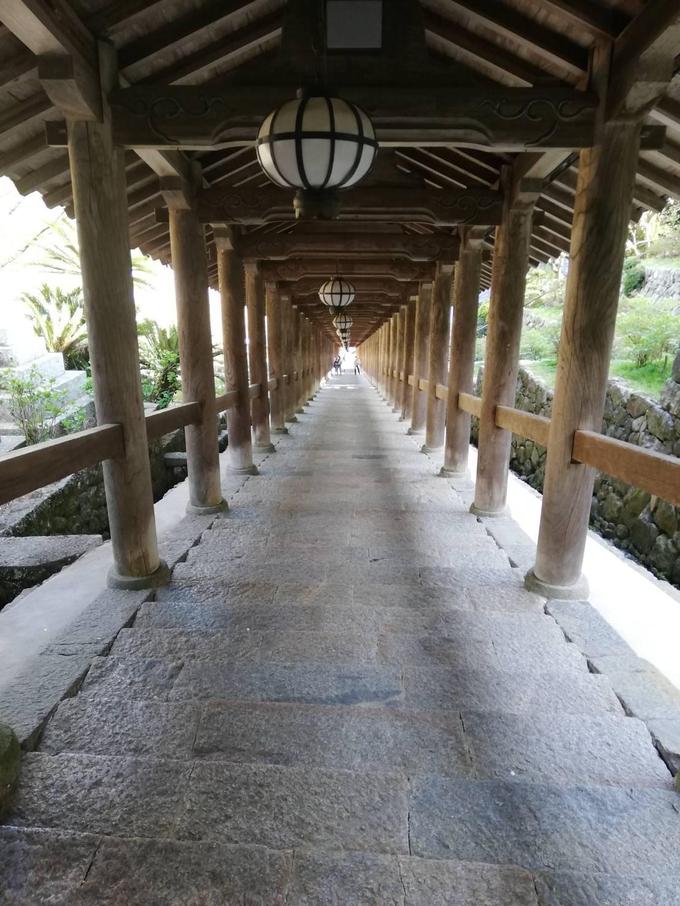 Follow a touristy shopping street up a hill until you reach Hasedera. To get to the temple you must climb hundreds of stairs which are lined with stone lanterns and make for a rather beautiful photo. From the top are stunning views of the nearby mountain ranges from the temple's wooden stage. This was a great temple with a good atmosphere and one which I would recommend if you like large scale temples on expansive grounds surrounded by nature.

This area is not famous at all, but it consists of several streets that are home to entirely preserved old houses and shops from back when Uda Matsuyama was a thriving castle town. The area features old "machiya" style buildings and has a very authentic feel - this is not a tourist town but a place where real people still live and work. You see the local soy sauce makers, sake brewers, butchers and sweet shops, just as they were back then. Take a short walk around and have a look if you are in search of "genuine old Japan". Here is also the oldest medicinal herbalist in Japan - Morino Old Medicinal Herbs. 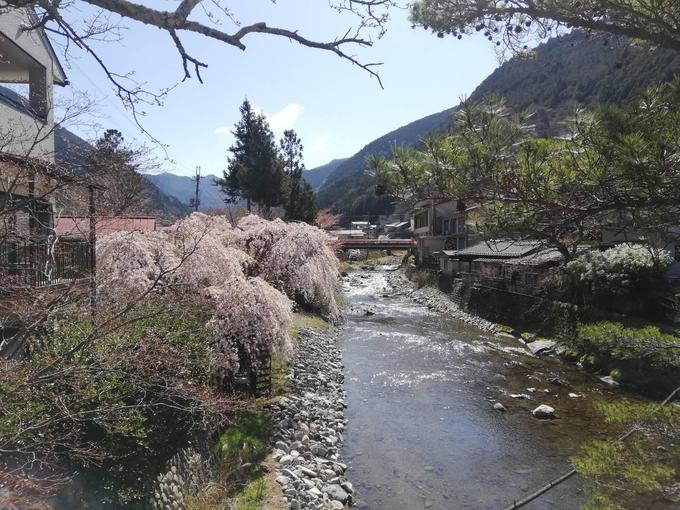 Nestled high in the Southern mountains of Nara, Dorogawa Onsen retains its authentic atmosphere. It is a town where Shugendo practitioners come to rest on their pilgrimage to Ohminesanji Temple and as such is simple and unrefined, making it a place where you can step away from the world and calm your inner soul. It used to be off limits to women, but luckily this has now changed and everyone is welcome. Even in April it was -2 degrees Celsius at night, and our ryokan had only a very small heater, so we had to sleep in several layers plus a scarf and hat. The food was excellent, lots of fresh mountain vegetable dishes and river fish. 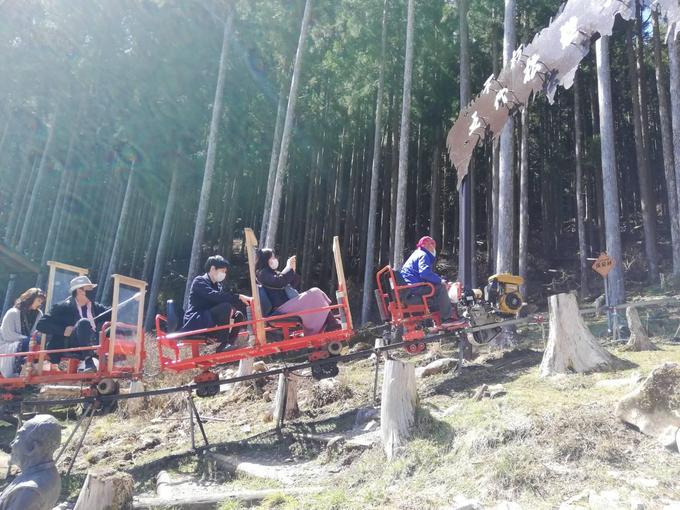 This limestone cave itself is fairly small, but exciting in that you practically need to crawl in order to enter, so low is the roof. You get a short guided tour inside, in Japanese only. For me the more exciting thing was the way to reach the cave - via a "torokko" train, or a small cart that is used to carry citrus from the mountain to the bottom. It is almost vertical in places and quite thrilling despite its slow speed.

Part of the Dorogawa Onsen area, Mitarai Valley features several dramatic waterfalls and numerous hiking trails. Unfortunately my daughter was very cranky when we came here, so we couldn't climb very high, but I really enjoyed this natural spot and the base of the waterfall looked like an excellent spot to swim in summer. 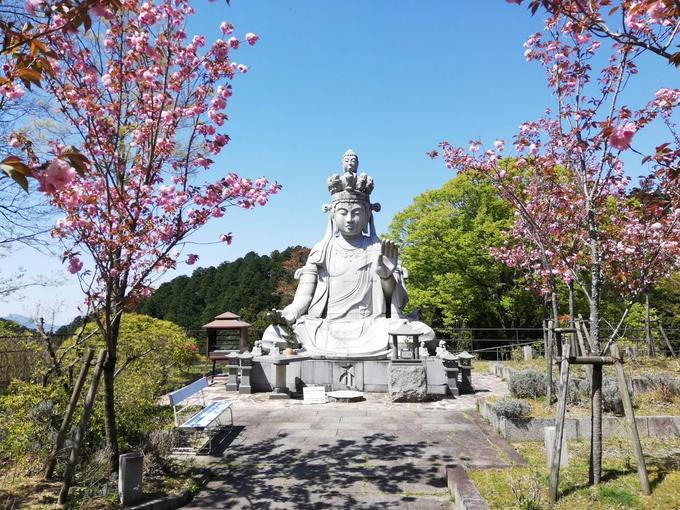 When we went here the sakura had just faded, but I could tell it would be STUNNING in sakura season. The Temple was built in 717 AD and is an interesting mix of Japanese and Indian styles. There is a giant Kanon and giant Buddha and numerous other statues to see. This temple is near the town of Asuka, a wonderfully green and picturesque town. Having rather large grounds, it's worth a stop while you're in Asuka. There is a nursing home right on the grounds of this temple, not too bad a place to live I'd say!

Ishibutai is a large stone "kofun" tomb from the Asuka period. It occupies a space of 54 m, and is the largest known megalithic structure in Japan. Basically it's like Stonehenge, some people will appreciate it, others not so much. I liked the park grounds myself, very green with lots of grass. They were closing early that day due to the Olympic torch coming there that evening.

Asuka has several more places of interest that we couldn't see, so I urge everyone to rent bikes and cycle around the town - it's so very green and pleasant!

Iwaki City in Fukush...
home
May Flowers in Japan...